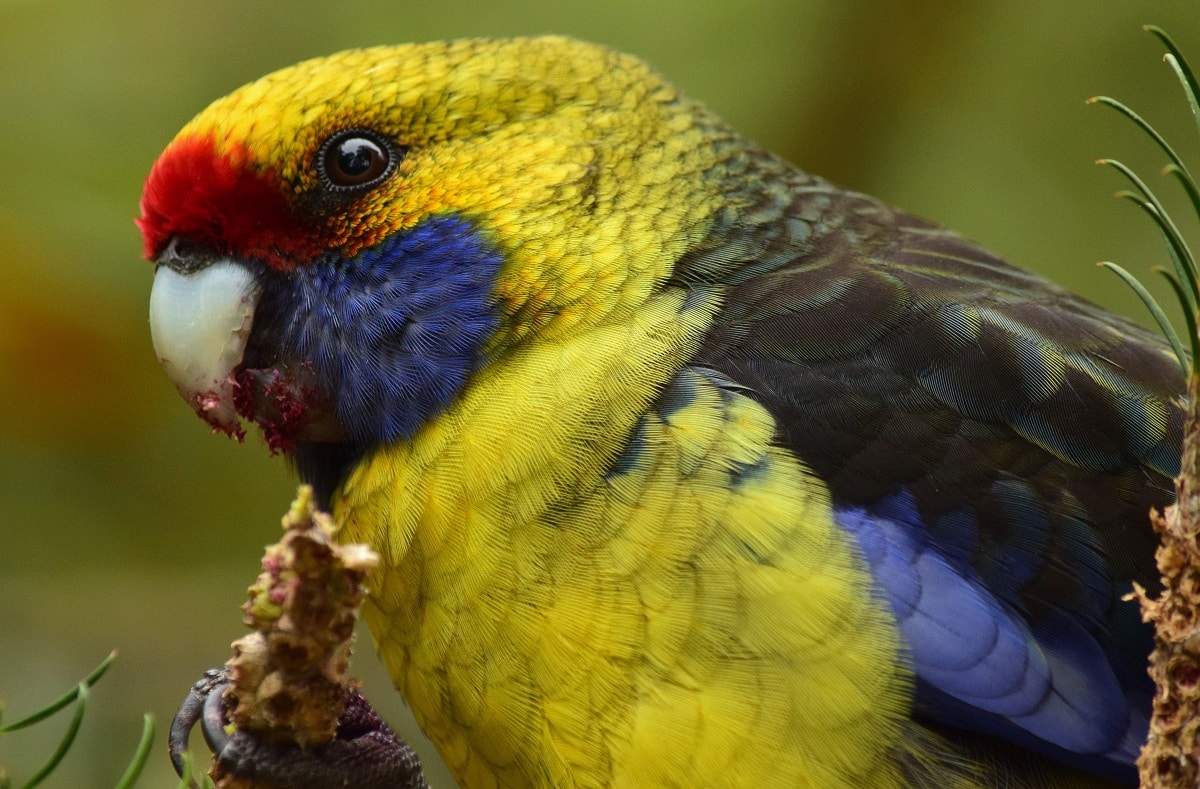 Most parrot enthusiasts are familiar with the eastern rosella and crimson rosella from Australia, but have you also heard of the green rosella (Platycercus caledonicus)? This Tasmanian native is beautifully colored and makes a great pet.

If you’re thinking of getting a green rosella or just want to know more, keep reading to find out everything you need to know!

This post contains affiliate links. If you make a purchase, a small percentage will go to Psittacology at no extra cost to you. Thanks for supporting Psittacology!

As far as rosellas of the genus Platycercus go, the green rosella is not among the most spectacular species. That might be why it’s a little less popular in aviculture than many of its cousins! Still, it’s a beautiful parrot to look at.

Green rosellas get their name from the yellowish-green coloration on their belly and underside. The feathers on their back are mostly brownish-black in color, with blue edges and a hint of green. There’s a patch of red above the beak and the cheeks are a pretty striking blue.

Did you know? As with quite a few other parrots, young green rosellas look different from the adults. Their backs are green rather than blueish black. It’s not until they reach around 2 years old that they fully molt into their adult coloration.

The green rosella was first spotted by Westerners on one of James Cook’s expeditions, during which loads of bird specimens were collected. After that, though, it took a while before it could actually be described. The specimens were often badly labelled and falling apart; the ornitologist who collected them died before much headway could be made.

The specimen for the green rosella was eventually given the name Psittacus caledonicus, or the Caledonian parrot, as a result of the confusion. It wasn’t until later that it was renamed to Platycercus, but the incorrect “caledonicus” stuck.

The green rosella can actually naturally be found in Tasmania (not New Caledonia). It’s also common on some of the islands in the Bass Strait, the sea that separates Australia and Tasmania. This includes King Island, Flinders Island, and a few other groups of small scattered islands.

Within its natural range, this parrot is really not too picky about habitat type. As long as there are some trees or brush available, anything goes: rainforest, mountain forest, orchards, gardens, parks and more.

The species can be found almost at sea level or up to 1500m (almost 5000 feet). It usually travels in small groups and mostly forages in trees, although it also comes down to the ground now and again. Nesting takes place in hollow trees, which is common for parrots. Eucalyptus is their favorite.

Did you know? The green rosella is listed as “Least Concern” by the IUCN Red List, and it’s one of the more common birds on the islands. However, it is noted that its population size is decreasing. Likely reasons for this include habitat loss and invasive species causing problems.

In the wild, the green rosella feeds on the seeds of a wide range of different plants. They like the seeds of various grass and shrub species, but also hawthorn, huon pine, tea tree and many more.

Aside from seeds, this parrot eats flowers, leaf buds and the occasional insect. It’s was even considered an agricultural pest that tended to cause trouble for early settlers in Tasmania.

For example, famous ornithologist John Gould visited the island somewhere in the 1800s and noted: “(…) in one instance I saw hundreds congregated at a barn-door among the straw of some recently thrashed corn, precisely after the manner of pigeons and sparrows in England”. By the way: he also noted that green rosellas were often eaten, and personally considered the taste to be “excellent”.

If you’d like to keep a green rosella as a pet, it’s important to pay some attention to your bird’s diet. For some reason, these parrots seem to be more prone to obesity than other rosellas!

The classic dried seed mixture that we associate with parrots definitely won’t do for your green rosella. Sunflower seeds especially are much too high in fat, which can lead to problems like fatty liver disease.

Instead, go for foods that are lower in calories and more nutrient-dense, like:

Parrots like these don’t need a lot of extra protein in their diet, but you can offer some boiled egg as a treat once in a while. Even dried mealworms or similar would work well.

Be sure to always provide your green rosella with access to fresh water. A source of calcium, like a calcium block, is also always a good idea.

Rosellas in general are not all that popular as house pets. This applies even more to the green rosella, which isn’t that common anyway: even though these birds are spectacular to see, they’re still among the less colorful in the genus Platycercus.

Because green rosellas are apparently so prone to becoming obese, it’s usually recommended to keep them in a large aviary of at least around 5 meters (16ft) in length.

This being said, there’s no reason you can’t keep these parrots in the house. You’d just need to go for the largest cage possible and give your bird plenty of opportunity to fly around. A horizontal cage works better than a high one.

If you do keep your rosella(s) in an aviary, it’s a good idea to think twice about combining them with other parrots. They’ve got a reputation for being aggressive and don’t play nice with their neighbors. It may be best to just keep them with their own kind.

If you go for an aviary for your green rosella(s), remember it should be shaded, offer plenty of perches and toys. Some bathing spots will also be appreciated, and fresh parrot-safe branches are always great to include. Make sure no predators, like snakes, can get in!

For an indoor cage, it’s important to balance décor and space. Your bird will need natural perches and lots of fun toys, but it also needs to be able to spread its wings. Be sure to leave a good open area in the center.

If you’d like to keep your parrot alone, you’ll need to be home most of the day to keep it company. Take it out of its cage to hang out, sing to it, do some trick training, you name it!

For those that work a normal 9-5 job, it’s usually better to just get the bird a mate.

Some sources actually describe green rosellas as “apathetic”. You’ll have to work to make sure your bird moves around enough and doesn’t become overweight! It’s also important to prevent boredom and always keep stimulating those smart little brains.

Letting the parrot out for at least a few hours a day is the most important factor. Set up a nice play gym on top of the cage to stimulate playtime, and let your bird explore freely in a safe environment.

They can chew things up, but that’s just part of living with parrots! Being able to putter around the house really helps with preventing obesity and boredom in parrots, so it’s important to give yours that opportunity daily.

Although rosellas aren’t the cuddliest birds, they can still make fantastic little pets. If you socialize yours properly, it will more than likely love to hang out together for playtime, training or even just to sit with you while you watch a movie.

As mentioned earlier, remember that green rosellas are considered aggressive towards other parrot species. In terms of people, they’re fine, but they are prone to chewing on all sorts of objects.

The green rosella’s flock call is considered a bit unusual for parrots. If you’re curious, you can listen on Xeno-Canto!

Generally speaking, this is not considered an overly loud species, but that doesn’t mean they’re quiet either. All parrots make a significant amount of noise.

Like most parrots, green rosellas can pick up some whistles and simple phrases. Their voices aren’t very clear, though, and they’re definitely not on the list of best talking parrots.

Parrots are great at getting themselves into trouble, and the green rosella is no exception. You should always have the number for an avian vet handy in case of an emergency.

Other good safety practices for parrots kept as house pets include:

Lastly, don’t forget to take any new birds you add to your family to the vet for an initial check-up. After that, you can go for check-ups yearly.

If you have any more questions about the green rosella or if you want to share your own experiences with this beautiful Tasmanian native, don’t hesitate to leave a comment below.