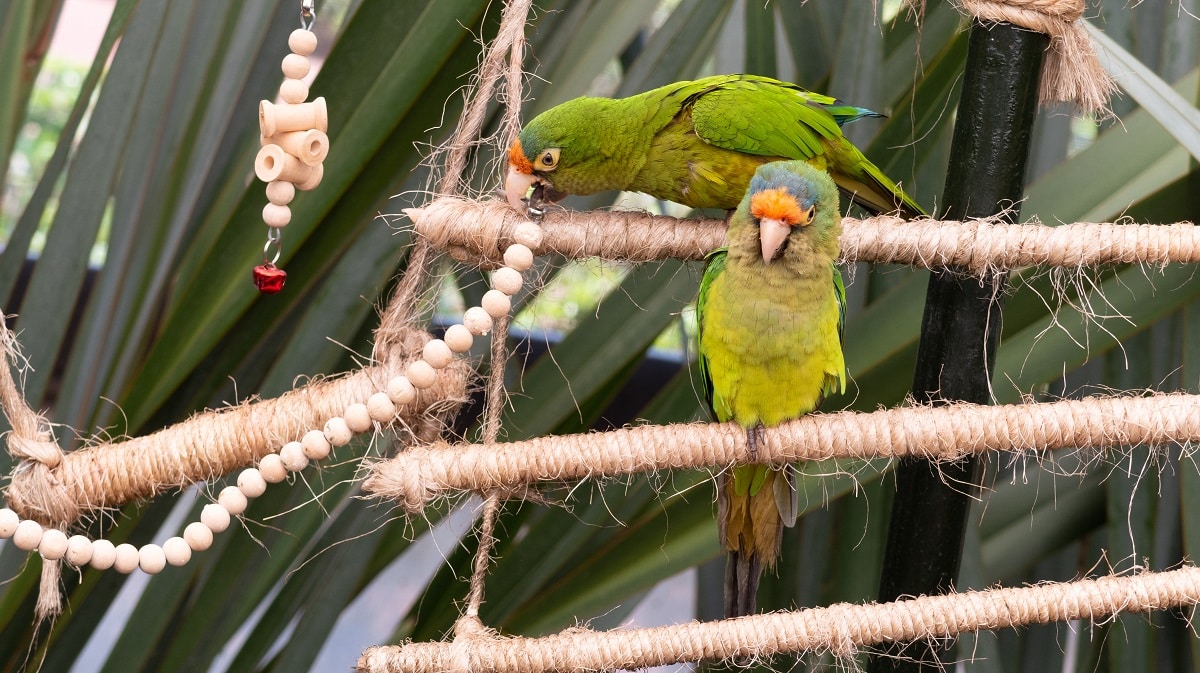 The half-moon conure is a boisterous South American parrot popular as a household pet. They’re known for being friendly and easy to train, but they’ve also got big attitudes! Also known as orange-fronted conures or sometimes as Petz’s conures, they’re a little quieter than many of their popular cousins.

Let’s dig deeper into how to recognize the beautiful half-moon conure, as well as its origins, diet, breeding habits and how to care for it as a pet.

The half-moon conure’s range in the wild covers the Pacific (western) side of Central America, from Mexico all the way down to Costa Rica.

Orange-fronted conures inhabit half-open areas, generally staying below 600 meters/2000 ft of elevation. The species isn’t too specific about habitat as long as there are some trees to hang out in. It’s commonly seen at forest edges, lowlands and foothills, savannah forest and shrubland.

Aside from this, these conures also thrive in tropical woodlands and at river banks. They even occur near human populations, like in palm and fruit plantations.

At the time of writing, the IUCN Red List last assessed the half-moon conure in 2020, listing it as Vulnerable. Despite still being described as very common in the wild, their numbers are declining sharply.

The species is mainly threatened by illegal trapping for the pet trade. Luckily, the rates of illegal capture appear to have been slowing down over the last few years. Exporting native parrot species was banned in Mexico in 2008, at least.

Did you know? Despite poaching of half-moon conures still being a common source of extra income for locals, it’s become a lot harder to find this species in aviculture. Maybe that’s a good sign!

These conures are easy to recognize by their bright green color, with the back and leg feathers leaning towards a lighter yellowish green. Their most striking characteristic, as the name suggests, is of course the orange forehead.

Half-moon conures sport a horn-colored beak and a featherless off-white eye-ring around their yellowish eyes. This species is easy to confuse with the peach-fronted conure (Eupsittula aurea), which can look near identical to the untrained eye! However, there are differences: peach-fronts are a bit larger, and more importantly, their beaks are black.

As for coloration, males and females are not sexually dimorphic, meaning they’re identical. You’ll need a DNA test to figure out whether your half-moon conure is a boy or girl! Younger birds will have a smaller orange forehead patch and darker irises that lighten to yellow as they age.

In the wild, half-moon conures will consume whatever foods they can find in their natural treetop habitat, although they’ll also occasionally wreck corn plantations. Their favorite meals include various tree seeds, fruits like wild figs and cultured banana, and flowers.

In captivity, offering the right parrot diet is incredibly important for your bird’s health. Our birds don’t know what a healthy diet is: they’ll eat whatever is offered to them and, like us humans, actually prefer fatty and sugary foods.

A suitable and healthy diet will include a high-quality pelleted food, a good seed mix for hookbills without sunflower seeds, plenty of fresh vegetables and some fresh fruit. You can also offer sprouted seeds, some cooked whole-grain pasta or rice, and pieces of nuts as (training) treats.

It’s very important for these conures to be able to stretch their wings and get plenty of exercise. Obesity is rampant in pet parrots, and it’s noted as a huge silent killers of our beloved birds!

It’s recommended to get a large cage that offers plenty of room for play and exercise. A conure cage should measure at least 36″ x 36″ x 24″, although larger is always better. Daily time outside the cage in a parrot-proofed room is also essential, not in the least because these birds love exploring.

Because the half-moon conure is so active, it’s a good idea to provide play gyms and safe flight areas for safe and healthy exercise. Decorate the cage itself with ladders, natural perches and plenty of parrot toys to play with. Rotate toys on a bi-weekly basis to keep them fresh and fun!

Generally speaking, well-socialized half-moon conures are affectionate and loveable parrots. Like other conures, they’re playful and have tons of energy, with friendly and energetic personalities. They usually have no issues sharing their space with other friendly parrots, although as always, each should have their own cage.

Keep in mind that these parrots are very sociable. In the wild, they occur in flocks of 50-100 birds and form monogamous pairs. It’s not surprising, then, that a neglected half-moon conure can become bored, lonely or even depressed. This can result in issues like feather plucking, excessive vocalization or even aggression.

In captivity, your parrot depends on your attention and needs plenty of daily interaction. Set aside plenty of time to socialize! Training (they’re very good at learning tricks!), talking to and just hanging out with your bird are all great activities.

If you work a regular 9 to 5 job, it may be a good idea to get two half-moon conures to help prevent loneliness.

The half-moon conure is known as one of the quieter conure species, especially among shriekers like Eupsittulas and Aratingas. No parrot is silent, and this species’ flock call is still pretty piercing, but an orange-fronted conure may be an alright choice for people living in apartments.

Although these conures are not known for being champion talkers, some can end up learning to repeat some words, tunes and short phrases. You can encourage this mimicking behavior through lots of repetition, as well as by offering a treat for a job well done.

Tip: Wondering what these parrots sound like? You can have a listen at Xeno-Canto.

According to the 1991 Psittacine Captive Breeding Survey, half-moon conures aren’t among the more prolific conures. This is likely due to their highly specialized nesting requirements: they’re arboreal termitarium breeders. In fact, their natural range lines up pretty perfectly with that of the tree-dwelling termite Nasititermes nigriceps!

When half-moon conures breed in the wild, they burrow an upward tunnel into the nest of an arboreal termit, found high up in the trees. The male does most of the work.

Afterwards, the parrots leave the nest for around a week to allow the termites to seal the cavity. Once this is done, they are finally ready to raise their family. The whole situation isn’t ideal for the termites themselves: their nests are often left destroyed and vulnerable to predatory ants.

On average, a clutch consists of two to five eggs, which are incubated by the female parrot for up to 35 days. Chicks are fed by both parents, developing quickly and leaving the nest at around 50 days of age.

Like most other parrots, the orange-fronted conure is monogamous. In captivity, this can include people: these conures can be one-person birds that become overly affectionate towards their owner. During the breeding season, hand-raised individuals can (temporarily) turn territorial and aggressive.

Did you know? Hollow trees are also occasionally used for half-moon conure breeding, but they’re not preferred. This may be because they don’t offer the right microclimate.

Conures are known for being pretty adaptable birds. However, it’s still important to provide a healthy environment to prevent your beloved orange-fronted conure from getting sick.

According to research, pneumonia, aspergillosis and other respiratory issues are the most common health issues among half-moon conures. Liver problems and behavioral problems can also develop if proper diet and exercise are not provided.

So what can you do to keep your half-moon conure as healthy as possible? First off, always be sure to provide a clean environment with plenty of room for exercise. Hygiene is important, both for the cage and the parrot itself. Don’t forget to offer a bird bath or mist your conure regularly with room-temperature water!

Finally, avoid temperature extremes. Keep in mind that this bird originates from a tropical climate and is prone to getting cold. Low temps can cause them to fluff up and stop eating, and sudden changes can affect their immune systems.

Still have questions about the beautiful half-moon conure or want to share your own experiences with these colorful South American parrots? Don’t hesitate to leave a comment below!

Palomera-Garcia, C. (2010). Habitat use and local harvesting practices of the Orange-fronted Parakeet (Aratinga canicularis) in western Mexico. Studies on Neotropical Fauna and Environment, 45(3), 139-147.