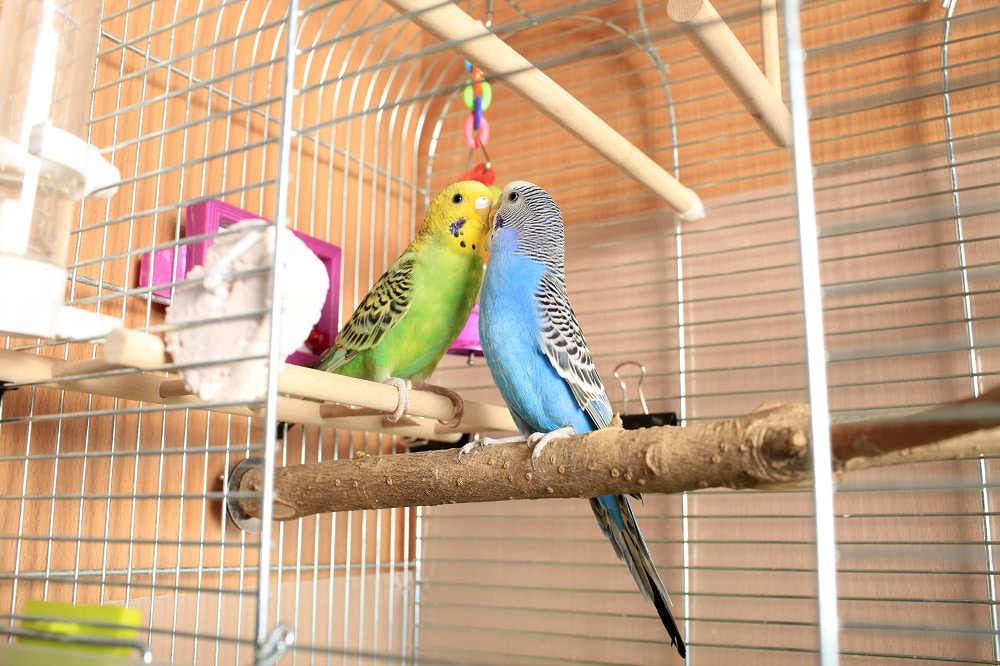 If you’re new to parrot keeping, you might be wondering why many parrot cages contain a white or multicolored block. Let’s clear that up here: they’re calcium blocks, meant to ensure the bird gets enough calcium to grow and function normally.

What is a calcium block made of? Do you need to supplement your parrot’s diet by putting one in its cage? Let’s go into all the ins and outs of calcium blocks as parrot diet supplements.

What is a calcium block?

The function of a calcium block should be pretty clear from its name: providing calcium. It’s extremely important for birds like parrots to receive enough of this element in order to function normally.

Calcium blocks were developed as an easy way to provide your parrot with the option to consume more calcium if it feels the need. They can easily be hung on the cage bars for the bird to access. Many calcium blocks are also enriched with additional vitamins and trace nutrients.

Did you know? Some other small pets need calcium blocks. These include turtles and hermit crabs.

Why do parrots need calcium?

We won’t go too far into the scientific data, but basically, calcium is simply essential for a bird’s normal formation and functioning.

A lack of calcium can lead to a range of issues including abnormal formation in young birds’ skeletons, improper feather formation (leading to plucking), failed eggs and seizures (De Matos, 2008; McDonald, 1988). According to these sources, the latter is particularly common in African grey parrots, which are prone to calcium deficiencies.

Female birds that are laying especially have a need for calcium, as egg production really depletes their available supply. Without a good source of this element, eggs and chicks can come out looking seriously wonky. The mother bird can find it difficult to recover and, with some bad luck, might not pull through the breeding season.

To use a non-parrot example, zebra finches use 20%(!!!) of their calcium stores for a single egg. A lot of that doesn’t actually come from dietary calcium but from their own bones. (De Matos, 2008). This can cause brittle bones if the resulting deficiency is not corrected. Yeah, birds are weird.

Does your parrot need a calcium block?

In many cases, it’s probably actually not essential. A parrot’s diet should be varied and contain plenty of foods that naturally keep their calcium levels in the right place. The only parrots that are generally in need of calcium supplementation are those that receive an all-seed diet and laying females.

So why do people so widely use these blocks in their parrot’s cages then? Well, the nice thing about them is that they’re optional. Unlike when you sprinkle calcium additives over your bird’s food, it doesn’t have to nibble at a calcium block. It can do so when it feels the need to consume certain nutrients, just like it would in the wild by visiting a mineral lick.

As such, your parrot might ignore a calcium block for months at a time and then suddenly develop an apparent fondness for it. Either way, I personally always have one of these blocks available for mine, just in case. I regularly see them scraping away at it. If anything, it provides some extra enrichment.

Calcium blocks are not the only way to supply your bird with this element. Although it’s debated how easily their nutrients can be taken up by bird’s bodies, cuttlebones are a very popular sight in parrot cages as well.

If you really want to make sure your bird is consuming the calcium supplement, like when it’s breeding, there are also some other options. A simple method is to grind eggshells and sprinkle the resulting powder over some tasty seeds.

Additionally, you can also go for commercial calcium supplements, which come as a powder or liquid. Parrot multivitamins usually contain this element as well.

If you have any more questions about calcium blocks for parrots or if you’d like to share your own experiences, don’t hesitate to leave a comment below! ?

8 thoughts on “Calcium Block: What Is It And Does Your Parrot Need It?”