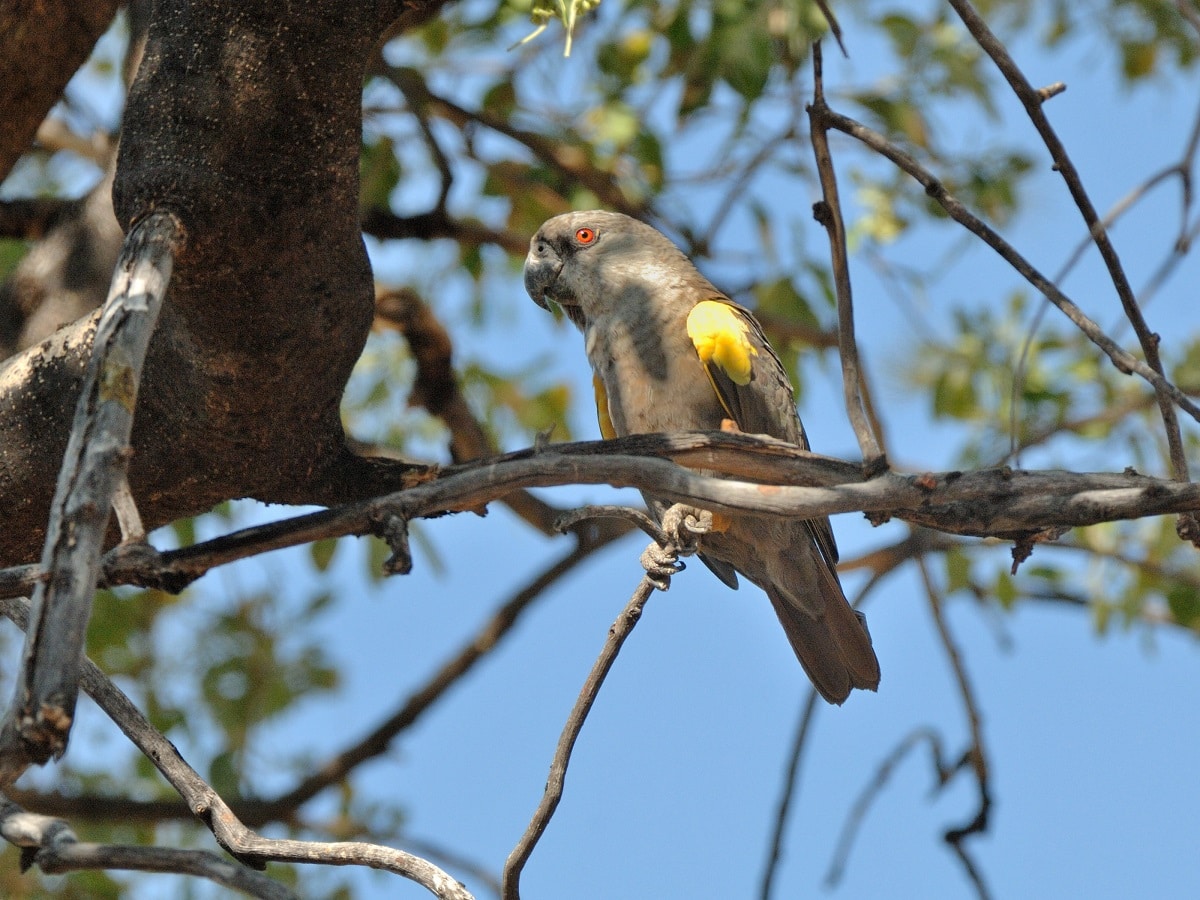 The striking Rüppell’s parrot (Poicephalus rueppellii) is an African native that’s easy to recognize from its almost fully grey body. Uncommon in aviculture, this species was named after German naturalist and explorer Eduard Rüppell.

Below, let’s have a closer look at how to recognize the Rüppell’s parrot, as well as its origins, what foods it likes and finally its breeding habits.

Rüppell’s parrots originate from the arid regions of mostly Namibia and to a lesser degree Angola in southwestern Africa, both vast and sparsely populated countries characterized by savannahs and wetlands. The chance of encountering them is greatest in shaded areas near streams or other water sources.

The IUCN Red List considers Poicephalus rueppellii to be a species of Least Concern, although populations are decreasing. A 2000 study attributes this mostly to the illegal catching of birds for the pet trade. At least a few hundred birds are caught and exported yearly, many of which don’t make it out of the country alive.

The Rüppell’s parrot is primarily dark blackish-brown in color, with striking red eyes. This is a species that shows notable sexual dimorphism: the females’ appearance is similar to the male in many ways, only she sports blue feathers on the lower back and the rump (similar to the closely related Meyer’s Parrot, Poicephalus meyeri). Both the male and female adults show yellow markings on the wings and legs.

Young Rüppell’s parrots will show juvenile coloration until they are about 14 months of age. During this time, males and females can be difficult to tell apart, as both have the blue feathers on their lower body that will later be reserved for the females only. Their yellow thigh and shoulder patches are less pronounced than in adults or even missing entirely.

An adult Rüppell’s parrot grows to a maximum size of around 25 centimeters (9.1″) and weighs up to 120 grams. Although birdwatchers can recognize this parrot species by its high-pitched squeals (have a listen at Xeno-Canto), it’s generally considered quieter than other Poicephalus parrots.

According to research, Rüppell’s parrots eat a wide range of different foods. The species was observed feeding on no less than 37 plant species in Namibia in one study!

Because its natural habitat is highly seasonal, this parrot’s diet varies according to the time of the year. It eats tree seeds, buds, fruits, nuts and berries from trees like Terminalia, Acacia and Albizia. Like many other parrots, it even occasionally consumes insects, such as spiders and caterpillars.

A pet Rüppell’s parrot can be fed a standard parrot diet. A mix of high-quality pelleted food and a sunflower-free hookbill seed mixture should work well. Supplement with fresh vegetables, some fresh fruits and extras like cooked legumes.

Rüppell’s parrots nest in tree cavities, either natural or previously excavated by woodpeckers. The breeding season usually begins in January and continues into June.

On average, a clutch consists of three to five white eggs, which are incubated by the female parrot for about 24 to 30 days. The chicks leave the nest at around 68 days old.

Like most other parrots, this one is monogamous: an established pair of Rüppell’s parrots will be inseparable.

This species is not all too common in aviculture, but some parrot enthusiasts do keep it. It’s known for being on the quiet side in terms of Poicephalus and parrots in general, making it a good choice for apartment living.

Rüppell’s parrot owners report that well-socialized birds are very affectionate and easy to handle. They do tend to bond to a single person, and they need plenty of activities and enrichment to prevent stress and destructive behavior.

If you have any more questions about the Rüppell’s parrot or if you’d like to share your own experiences with this striking African native, don’t hesitate to leave a comment below!