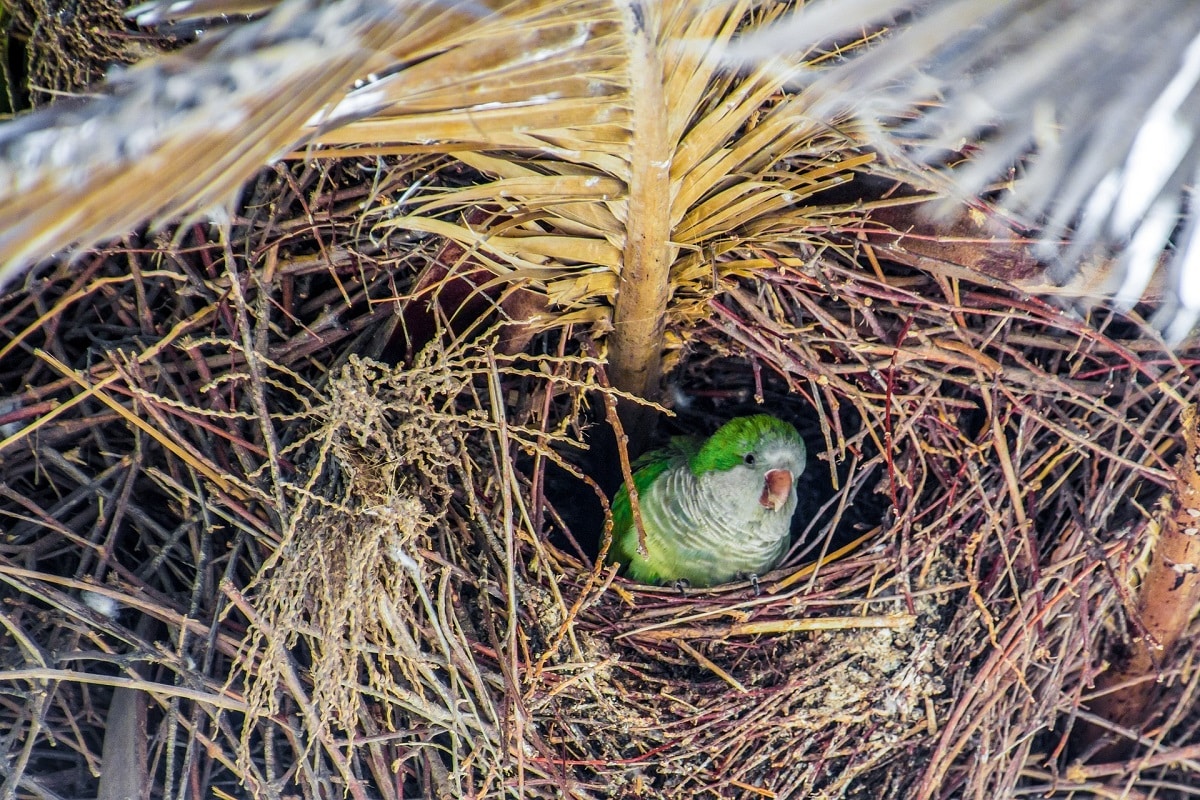 If you’re into parrots, you’ve probably heard of Myiopsitta monachus: the quaker parrot or monk parakeet. This green and grey South American parakeet is popular as a pet, but did you know there’s more to it than that? Let me introduce you to the quaker parrot nest, one of the most elaborate homes in the bird world.

What does a quaker parrot nest look like? Why do they do it? Should you let them build one in the home? Let’s go into everything you need to know about these avian apartment complexes!

Quaker parrot nest in the wild

Quaker parrots are naturally found in South America, specifically Argentina, Paraguay, Bolivia and southwestern Brazil. In their natural habitat, these small parrots inhabit forests and other areas with at least some tree growth. They form flocks of up to 50 birds that forage and roost together.

The species’ shared nests are built in trees and other vertical structures, including things like telephone poles, A/C units, power lines and much more. There’s even a subspecies that nests on cliffs.

According to Parrots of the World, the nests are often made of hackberry (Celtis sp.) twigs, although it seems anything goes in a pinch. Everyone helps to find material, and the nest is expertly constructed by the males in particular to withstand wind and provide a safe place to live and rear young. Constant maintenance ensures the “apartments” remain in tip-top condition.

A quaker parrot nest can be individual, built and inhabited by just a single pair. In many cases, however, multiple pairs build nests in the same trees. The nests eventually merge together to form those huge, car-sized apartment complexes with multiple entrances that these birds are known for. One nest can weigh a whopping 1,000 kg (2,200 pounds) and is usually inhabited year-round.

Interestingly, it’s not just the quakers that inhabit these massive structures. Other species, including small birds of prey (spot-winged falconet, American kestrel) and different ducks (yellow-billed teal, whistling duck) will also take advantage of them. They’ve even been seen co-existing with tropical screech owls! Mammals like mice aren’t uncommon either.

Did you know? Quaker parrot nests are often attached to the nest of another, larger bird species: the jabiru stork (Jabiru mycteria). In one study in Brazil, 51% of quaker nests were attached to jabiru nests.

Although there are a few parrot species that have become invasive in different areas around the world (like the Indian ringneck), quakers really take the cake in this department. They can be found in dozens of different countries outside of their native range nowadays as a result of pets escaping or being set free intentionally.

It’s thought that their ability to build those big, communal nests plays an important role in quaker parrots being able to establish themselves so well. Whereas other parrots need hollow trees to nest in, quakers don’t really care where they end up! Almost any vertical structure works for them.

In the US, particularly in Florida, quakers are considered a serious problem by utility companies: utility poles make perfect nesting spots. In many other zones, these parrots have completely taken over parks, often displacing native species in the process. Not surprising, because they can be pretty aggressive when they want to chase off uninvited visitors! They even block off their nests with (thorny) branches in some cases.

Aside from the nesting situation, quaker parrots also cause trouble for native species by outcompeting them for food. As a result some places, notably Madrid in Spain, have unfortunately begun culling them.

Quaker parrot nest in the home

Will a pet quaker parrot also start building one of those intricate nests if you give it the right materials at home? Yep, absolutely. In fact, if you’d like to breed this species, it’s usually recommended to let them construct a nest themselves rather than giving them a normal parrot nest box. They seem to much prefer it.

Your domestic quaker will generally get the urge to start building in Spring. It’s usually recommended not to give parrots a place to nest in since it can trigger hormonal behavior like aggression, but to be honest, there isn’t much you can do to prevent it with these guys.

They will use anything and everything to build, instinctively weaving it together in expert fashion. As such, most folks just let them do their thing: at least it keeps them busy and provides great enrichment.

You can provide your monk parakeet with parrot-safe materials to build its nest with. If you live in an area where you can get palm leaves, those are absolutely perfect. Other than that, try popsicle sticks, twigs, straws, paper rope or whatever you’ve got on hand! If you don’t, your bird is likely to start stealing items like pens, cutlery and even eyeglasses anyway.

If you already have a quaker parrot, you’ll know that these birds can be territorial about their cage. Keep in mind that if you let yours buy a nest, this may or may not worsen. You’ll have to be aware of how to deal with this behavior. Many parrot owners think it’s worth it: it’s honestly just immensely cool to watch a quaker at work.

If you have any more questions about quaker parrot nests or if you’d like to share your own experiences with these colorful South American parrots, don’t hesitate to leave a comment below!