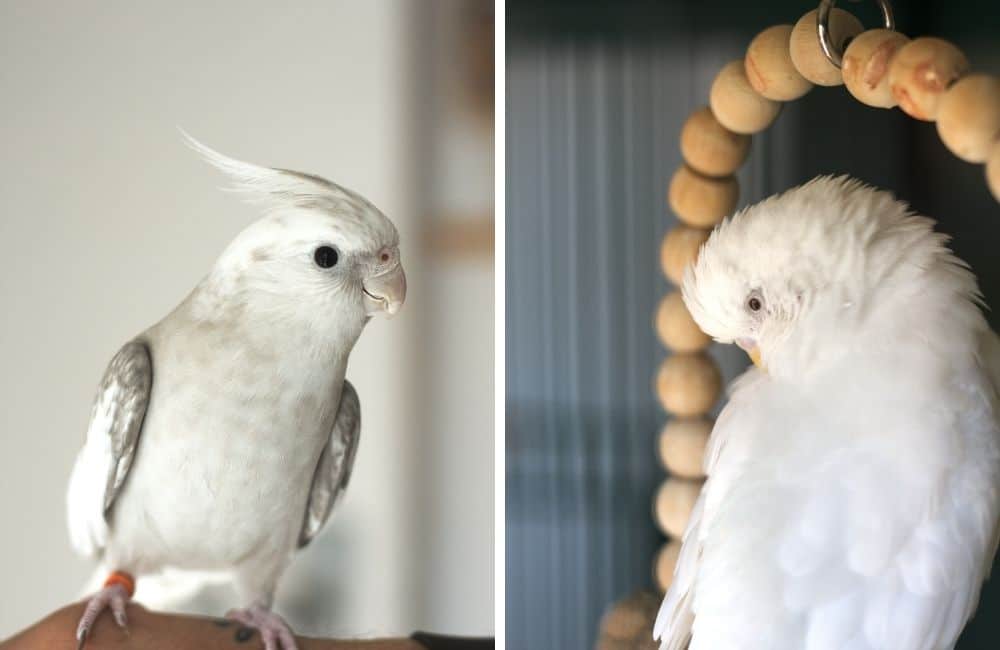 If you’re thinking about expanding your feathered family, you may be wondering whether a cockatiel and a budgie can live together. Or maybe your cockatiel and your budgie get along well, and you’d like to know if it’s possible to save on space by keeping them in a single cage.

Let’s go into whether a cockatiel and budgie can live together and why (not)!

Contents hide
1 Can a cockatiel and budgie live together?
1.1 Personality
1.2 Territorial behavior
2 Are there exceptions?
3 Should I get a budgie or a cockatiel?

Can a cockatiel and budgie live together?

These two parrot species are pretty similar in many aspects. They’re both seed eaters that can naturally be found in Australia, where flocks of both sometimes forage side-by-side. The two are actually the most popular pet parrots available today (with budgies ranking #1 and cockatiels #2).

Both species are very intelligent and make great pets, but many folks think too lightly of adding one to their family. Although they’re often seen as “beginner animals”, they do need some special care, including plenty of space, attention and mental stimulation.

All this being said, unfortunately, it’s generally still not recommended to keep a cockatiel and budgie in the same cage. Despite their many similarities, it can lead to stress for your birds. In rare cases, it can even turn out fatal. We’ll go into why below.

The Psittacology household currently contains both budgies and cockatiels, and let me tell you from my own experience: these species are quite different in terms of personality.

Cockatiels are known for being among the more laid-back, calm parrots. Budgies… not so much. They’re pocket rockets that seem to live life ten times faster than the average cockatiel.

Although you can let your cockatiel and budgie play in the same space under supervision, their personality differences alone make it a bad idea to make them live in one cage. Budgies can be real pests, stressing out your ‘tiel with their hyperactive and curious behavior. That’s not too much of a problem in an open area (although you should still separate them if either appears stressed), but it can cause issues in an enclosed cage.

What happens if your budgie doesn’t relent, and your cockatiel has nowhere to go? It isn’t unheard of for budgies to nip at feet and eyes. Will the stress cause it to become ill? Will the cockatiel lash out, injuring its smaller cage mate?

Did you know? Cockatiels are prone to night frights if they get spooked during nighttime. A cockatiel’s thrashing and flapping during one of these night frights can injure a budgie or cause it to injure itself in fright.

Speaking of being pests, budgies especially are known to become territorial about nesting areas. This is especially relevant in large aviaries that contain both species and feature nesting boxes. However, it can become an issue indoors as well.

What happens when your cockatiel or budgie becomes broody? They can start to view certain spaces in the cage as their nest and become violently protective of them. Suddenly, they won’t be so tolerant towards the other species anymore, and things can easily get out of hand.

Again, it’s unlikely for anyone to get hurt if the birds are on neutral, open ground like a cage-top playground. A large aviary also allows them flee any territorial attackers. In a closed cage, however, the risk of injury is a lot more real.

Did you know? Cockatiel cages are often unsuitable for budgies. The bars tend to be spaced too far apart, causing an escape risk or making it possible for your budgie to get themselves stuck.

As mentioned, indoor cages are more of a problem than large, outdoor aviaries. Cockatiels and budgies are kept together by aviary owners all the time, but I still want to mention that it’s not my favorite option.

Territorial budgies can become violent if they’ve got their sights set on a specific nesting box. This can cause injuries and dead chicks if there were already cockatiels nesting in the box.

In short: it can be done, but I wouldn’t. If you want to add some extra life to a cockatiel or budgie aviary, why not consider small quail like the genus Coturnix? Because quail stick to the bottom of the enclosure, they’re usually simply ignored, which is perfect for peaceful co-existence.

Should I get a budgie or a cockatiel?

As the two species can’t be kept together, you’ll have to choose, unless you’re okay with setting up two separate cages.

Not sure whether a budgie or a cockatiel is the perfect feathered companion for you? That’s not surprising, both can make great pets and have many wonderful qualities. Which matches you best depends mostly on what you’re looking for in your pet, although of course, there are no guarantees as to how individual birds’ personalities turn out.

Want to know more? The article on budgie vs cockatiel can help you make an informed decision.

2 thoughts on “Cockatiel and Budgie | Can They Live Together?”