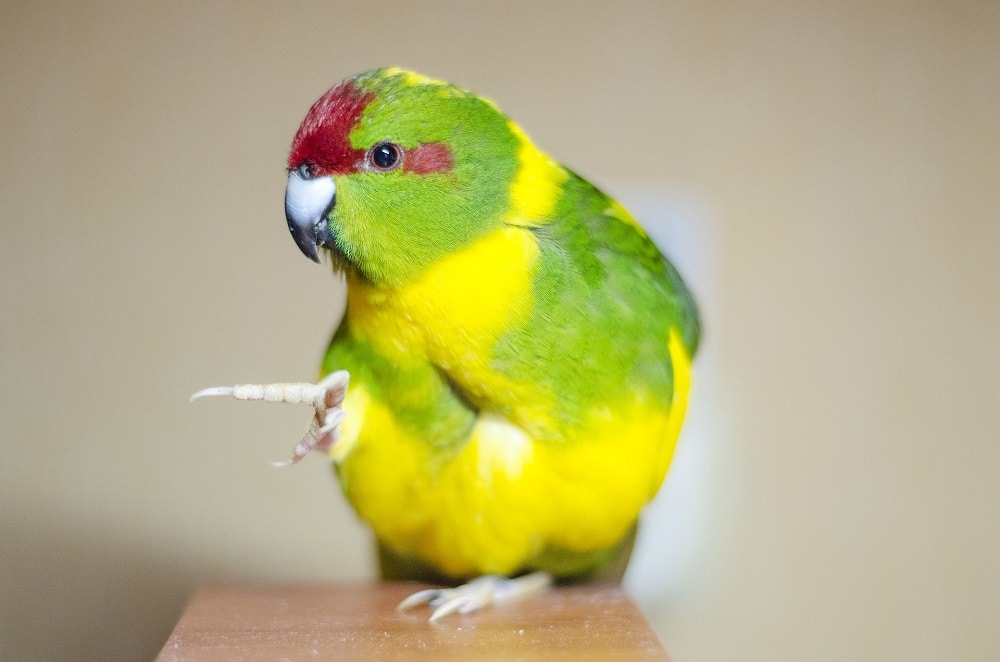 Thinking of adding a kakariki parakeet to your feathered family? Good choice! These delightful New Zealand natives can make fantastic, loving pets. But what does a kakariki need to thrive?

Keep reading for everything you need to know about kakariki care and keeping these parrots happy and healthy!

“Kakariki” (or Kākāriki, properly spelled) is a Māori name meaning “small parrot” and refers to three parakeet species in the genus Cyanoramphus. One of these species is popular as a pet.

This kakariki is commonly known as the red-crowned parakeet and is the species you’ll find at your local pet store. It’s naturally a green bird with blue flight feathers, as well as a red crown and eye flecks. Selective breeding in captivity has led to a bunch of different color variants being produced, though.

A few of the novaezelandiae kakariki color variations you may come across include, but are not limited to:

This species grows to a maximum size of up to 28 cm (11″) and a maximum weight of 100 grams (though most specimens weigh a little less).

The yellow-crowned parakeet is green like the rest of its genus, with the exception of its yellow crown and a bright red spot above its beak. Aside from in zoos, it’s not really kept in captivity.

The orange-fronted parakeet (a name this kakariki shares with a species of South American conure, confusingly enough), is green in color just like the other species in the genus. Like C. auriceps, it sports a yellow crown, although it can be told apart from its cousin by the orange spot above its beak. Its length and weight are almost identical.

You won’t find this one in your local pet store, as it’s unfortunately critically endangered. According to the IUCN, there were no more than around 250 mature individuals out there as of 2018.

Three species are now unfortunately considered extinct, mainly because of the introduction of invasive predators like cats and stoats:

Did you know? Don’t forget that juvenile parrots don’t always look the same as adults. Young kakarikis, for example, may lack the colored crown on their head.

All kakarikis are naturally found on the islands that make up New Zealand. In fact, they used to occur on the entire “mainland” (the two largest land masses), but are now largely confined to offshore islands and a few very limited mainland habitats.

According to the IUCN, C. Novaezelandiae (red-fronted parakeet) is the most common, with around 35.000 mature specimens remaining. Their troubles are mostly caused by the introduction of non-native predators. Habitat loss and the introduction of Parrot Beak and Feather Disease are also significant issues.

In the wild, kakarikis can mostly be found in a range of different forested habitat types, like beech forests. The red-fronted parakeet also sometimes pops up in scrubland and grassland, and it’s known to spend more time foraging on the ground than the other species.

Kakarikis can eat a variety of different foods, depending on what is available in their natural habitat at the time. Overall, their favorite foods include seeds, flowers, fruits, seeds, leaves and leaf buds.

Dietary habits can vary a little between species. One 1998 study noted, for example, that yellow-crowned kakarikis on Little Barrier Island were much more fond of insects than their red-crowned cousins. Although they’re mostly granivores and frugivores, some kakarikis have even been recorded actively hunting:

“(…) close inspection of the resultant corpses and indirect observations from widely separate locations (…) strongly suggested that several Antipodes Island Parakeets were actively hunting, killing and feeding on this storm petrel”

“Antipodes Island Parakeets appeared to visit systematically a number of holes in an area. The holes were investigated and, if large enough, entered, and the incubating adult storm petrel killed. Evidence suggests that if the hole was too small to enter some effort may be made to dig out the entrance to gain access (…)”

If we can conclude anything from the above about what you should be feeding your pet kakariki, it’s that variety is key. The red-crowned kakariki, which is pretty much the only species kept as a pet, naturally eats all sorts of different foods.

You can feed your pet kakariki a mix of the following and more:

Additionally, your kakariki should also always have access to fresh water, preferably from multiple sources. A cuttlebone or calcium block can help provide the calcium it needs for healthy bone and feather growth.

If you’d like to do some further reading on what your parrot can and can’t eat, be sure to check out the full article on parrot diet.

If you’d like to keep a pet kakariki, it’s important to provide your feathered friend with plenty of space to stretch its wings. How large its cage should be depends on how much time it will be spending in there – you can get away with a smaller one if your bird is usually out – but it’s always a good idea to go for the largest possible option.

A longer cage is considered better than a higher one, because parrots don’t really use vertical space. Something around 60 x 45 x 45 cm (24 x 18 x 18″) is okay for a kakariki that gets plenty of free-roaming time.

If your bird will spend most of its time inside, it’s a good idea to go for a flight cage of at least double that size. These are very active birds that need space to fly, climb and move around!

Remember: you can’t just stick your kakariki in a bare cage and be done with it. Parrots like these are very smart and need plenty of mental stimulation to keep them engaged and happy.

To start, fill the top area of the cage with natural perches (straight plastic or dowel perches can damage their feet in the long run). Then, add lots of colorful and fun parrot toys, making sure you do leave enough space to fly in the middle.

If you leave your kakariki to sit around lonely and without mental stimulation, it will suffer. These parakeets are very social and if you work away from home like most folks, yours will really appreciate a friend. If you’re going to keep yours alone, you must be able to spend much of the day hanging out with it.

Spend plenty of time with your kakariki(s). Tame birds will love to follow you around the house and see what you’re up to. You can use training time to teach useful tricks like stepping up while bonding at the same time, or just let your kakariki sit on your head or shoulder while you watch a movie.

Aside from the social aspect, a kakariki should also be given the chance to entertain itself. Let it out of its cage as much as you can: the exercise will also help prevent obesity, a huge silent killer among parrots. You can set up a cage-top play area with perches, food bowls and toys.

Speaking of parrot toys, your kakariki’s cage should be full of them, especially if it spends a lot of time inside. After all, they love colorful items that can be chewed, shredded and swung!

Every parrot has its own toy preferences, so just try some different things. Be sure to rotate toys regularly to keep things exciting and don’t be scared to add foraged items (like natural parrot-safe branches) or DIY toys.

During feeding time, a great enrichment opportunity is to stimulate foraging. Your kakariki would naturally spend much of its day searching for food, figuring out how to open seeds and trying to pry tasty morsels from difficult-to-reach spots.

So why would you just throw its food into a bowl and be done with it? Try foraging toys or set up a foraging box so your bird has to do a little searching to get what it wants.

Kakarikis aren’t the most popular pet parrots out there, but they’re reasonably common. The species works well for aviaries, but is also great for those who like to have their parrots inside the home. They’re just so much fun!

If you add a kakariki to your family, you can count on a bird that’s lively, curious, easy to train and generally friendly (though some of that depends on socialization). Their antics are unfailingly funny and although they’re usually not overly cuddly, you’ll really enjoy having one or more of these parakeets around.

You won’t have to worry about your kakariki bonding to a single family member: they’ve got plenty of affection to go around, making them great family pets. They’re suitable as first parrots as long as you make sure to do your research before buying one.

If you want to have a pet parrot, it’s important to keep in mind that all parrots make noise. It’s how they naturally communicate with each other while the flock is dispersed! Still, although kakarikis aren’t on the list of quietest pet birds, they’re definitely not the loudest either as far as parrots go.

Kakariki owners tend to mention they like their bird’s regular chatter, beeps, honks and whistles. Their noises are quite unusual and not really bothersome.

Actually, yes! They’re no Amazon parrot or African grey, but kakarikis can learn to imitate some words and noises. With a little patience and a whole lot of repetition, you can absolutely teach yours a few whistles and short phrases.

Because kakarikis are active and curious birds, they’re unfortunately also prone to getting in trouble. Taking measures to prevent accidents, and being prepared in case they do happen, can be key in preventing injury or even death.

Here are a few things you should consider:

If you have any more questions about Kakariki care or if you want to share your own experiences with these delightful New Zealand parakeets, don’t hesitate to leave a comment below!