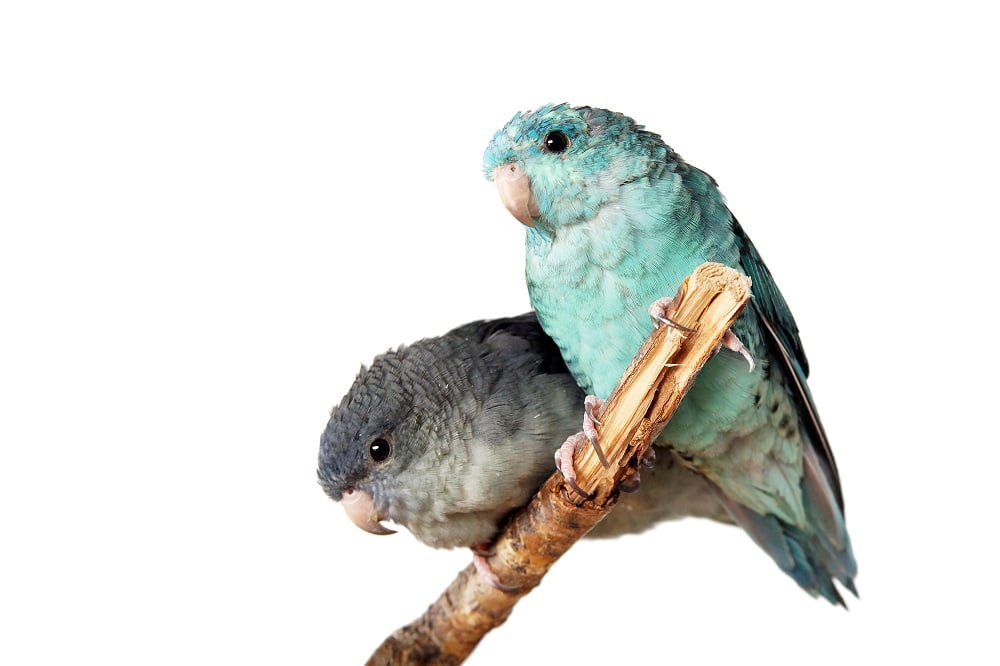 One of the most common questions when the time comes to choose a parrot is: are there pet birds that are quiet? Many of us are apartment dwellers who can’t afford to upset our neighbors, or are sensitive to noise ourselves.

Let’s go into 9 pet birds that are quiet – at least compared to other pet birds, that is.

Before you choose a bird…

Birds, including parrots, are prey animals that tend to exist in social groups (flocks) for safety purposes. In order to communicate with each other while they’re in flight or sitting in different trees, most of them have developed the ability to yell pretty loudly. It’s in their nature to use this ability to constantly verify that their flock is still there.

In addition to making sure they’re safe and surrounded by their flock, birds like parrots also use noise as a way of flirting. Any cockatiel or budgie owner will know the familiar songs that males produce as a way of wooing their female flock mates.

What we’re trying to say is, if you want a pet parrot or other type of bird, you have to make sure you can handle noise. Even the quietest pet birds on this list are not silent by any means.

One important thing is understanding what kinds of noise you’re most sensitive to, so you can avoid them. That’s why it can really help to visit other people who keep birds, head to your local bird rescue or try YouTube to listen to the different species.

Some parrots, like budgies, tend to produce a steady stream of noise but not be very loud. Others normally only vocalize for a few short periods a day, but produce extremely high decibel levels. The pitch can really vary as well. Certain species bust out raspy screams while others produce high-pitched ‘eeps’.

As an example, here at Psittacology headquarters, I somehow find the budgies’ flock calls much more grating than those of the resident cockatiel. The cockatiel’s call is much louder, but it just doesn’t bother me as much.

When choosing a parrot, it can really help to take some time to figure out which types of sounds you’re less sensitive to, so you don’t end up going crazy at a later stage. So many parrots and other birds are abandoned on a yearly basis because their owners weren’t prepared for the amount of noise they made. Make sure yours doesn’t become one of them!

One common appearance on lists of quiet pet birds are parrotlets from the genus Forpus. These are actually the smallest parrots to be kept as pets, with some of them weighing as little as 25 grams!

With small parrots come small screams and although a parrotlet can definitely cause a ruckus, it’s not going to be nearly as crazy as with their larger cousins. Additionally, parrotlets don’t make noise all day. If they do burst into screams, it usually doesn’t last longer than a couple of minutes.

As far as apartment living goes, parrotlets are a pretty good choice, unless your neighbors are very sensitive. Their ‘meeps’ are high-pitched, which doesn’t travel as well through walls as lower pitched noises do.

Here’s an example of what a parrotlet sounds like when it does decide to be as loud as it can: Parrotlet screeching.

The little Australian Bourke’s parakeet is what you could call a very polite parrot. It doesn’t squabble with other birds, is generally very calm and doesn’t tend to get very loud at all.

Closely related to the grass parakeets from the genus Neophema (which are also on the quiet side), rosy bourke parakeets are one of those species that tends to produce a constant stream of chatter. These twitters are not bothersome to most, though, and nor are their calls when they do decide they need to seek contact with their flock.

When it comes to apartment birds, most Bourke’s parakeet owners report it doesn’t get much better than these pretty pink ‘keets. If you’d like to know more about this species, check out the full guide to rosy bourke parakeet care. For an example of their singing, you can have a look at this video.

The ubiquitous budgie is one of the most popular pet birds. There are many reasons for this, one of them being their relatively low noise levels. Sure, a flock of budgies can definitely raise hell. It’s also true that they tend to be louder than rosy bourkes, but a solo budgie or a pair can generally be considered pretty quiet birds.

Female budgies are usually quieter than the males. It’s the boys that produce a constant stream of chatter and singing, most of which shouldn’t be too bothersome. A happy budgie twittering away is more of a happy sounds than an annoying one!

The only time a budgie’s vocalizations can really become grating is when they overdo it with the flock calls. Those repeated ‘EEP’ noises do get pretty loud, but luckily, a happy and healthy budgie should keep that limited to a few times a day.

You can find more information about keeping budgies in the budgie category. For an example of what budgie flock calls sound like, you can have a listen to this video.

Another small parakeet species makes the list! The lineolated parakeet (see the featured image at the top of this post) is native to Central and South America, where they tend to inhabit habitats at pretty high elevations.

Considered a very calm species, the lineolated parakeet does like to chatter, but this is not a type of noise that tends to be considered annoying. Their flock calls are a lot more shrill, though luckily they generally reserve those for a few short periods a day.

For an example of what a lineolated parakeet sounds when it decides to shatter the silence, check out this video: Screamer? Squaller? Singer?

The largest parrot on this list, the Senegal parrot is native to west Africa. They’re pretty popular as far as pet parrots go. This is just because they can make loving companions, but also because their vocalizations tend to fall well into the acceptable range.

If you get a Senegal, don’t expect it to be quiet. A parrot of this size has the capability of producing a pretty respectable decibel level, and it will use this capability from time to time. However, Senegals don’t tend to vocalize nearly as often as many other parrot species. That’s why it’s considered one of the better choices for apartment living.

A larger species like the Senegal parrot is obviously going to be a bit more of a risk in terms of noise than something like the tiny, quiet rosy bourke parrot. Choose wisely! Here’s what it sounds like when a Senegal decides to raise the roof: senegal parrot screaming.

Another extremely popular pet parrot, the Australian cockatiel is smaller than a Senegal parrot but larger than the rest of the parrots on this list. They’re a big favorite among parrot enthusiasts for their sweet and calm nature, which truly makes them lovely pets.

When it comes to noise, as with budgies, the females tend to be the quieter ones. They usually (though not always!) limit themselves to the occasional flock call. The males on the other hand use song as a way to express themselves, although it’s not something they do all day long like budgies tend to.

Cockatiels do vocalize. Their flock call are more or less acceptable in terms of shrillness, but they do also produce a more urgent screaming call that can be very annoying. Luckily, a happy cockatiel shouldn’t do this often. It can happen when their favorite person leaves or enters the room, or if they hear other birds.

You can find more information in the full article: Are cockatiels loud?

Other pet birds that are quiet

Let’s not forget that parrots are not the only pet birds out there! There are some other bird species that are commonly kept as pets. Some of those are pretty loud, while others won’t bother your neighbors at all.

There are loads of different finch species out there, many of which are very popular pets. The general consensus is that zebra finches and canaries are among the loudest of them. That being said, they’re all so small that they usually don’t reach annoying levels. Additionally, their singing blends in with outside wild bird noises much more than parrot squawks do.

Finch enthusiasts tend to agree that while they lack some of the personality of the other species, Gouldian finches are one of the quietest species. They do vocalize for most of the day, but their peeps should be fine for all but the most sensitive folks. And can you believe that amazing plumage?!

Pigeons and doves are classic pet birds. Although they tend to be more popular for outside aviaries or even free flying, there are some species that are sometimes kept indoors. An example is the small diamond dove, an Australian native.

Diamond doves are social birds that do communicate through noise. However, they coo more than anything, which is not nearly as bothersome as a shrill flock call or squawk. The funny thing is that diamond dove coos almost sound like a human trying to imitate a pigeon coo!

Although they’re not hugely popular as indoor pets due to their smell and the mess they make, button quail deserve a mention on this list. These tiny terrestrial birds are not really worth raising for meat or eggs, but they make fun pets. They’re actually great additions to aviaries with finches or peaceful parrots, bringing some life to the lower levels of the enclosure.

Like all birds on this list, button quail do make noise. It’s hard to get upset at them over it, though, as their coos and meeps are pretty sweet and not too loud.

An example of a group of button quail emitting their typical meeps can be found here: Button Quails – Sing It Boys.

If you have any more questions about pet birds that are quiet or if you’d like to share your own experiences, don’t hesitate to leave a comment below! ?

9 thoughts on “9 Pet Birds That Are Quiet | Quietest Parrots”