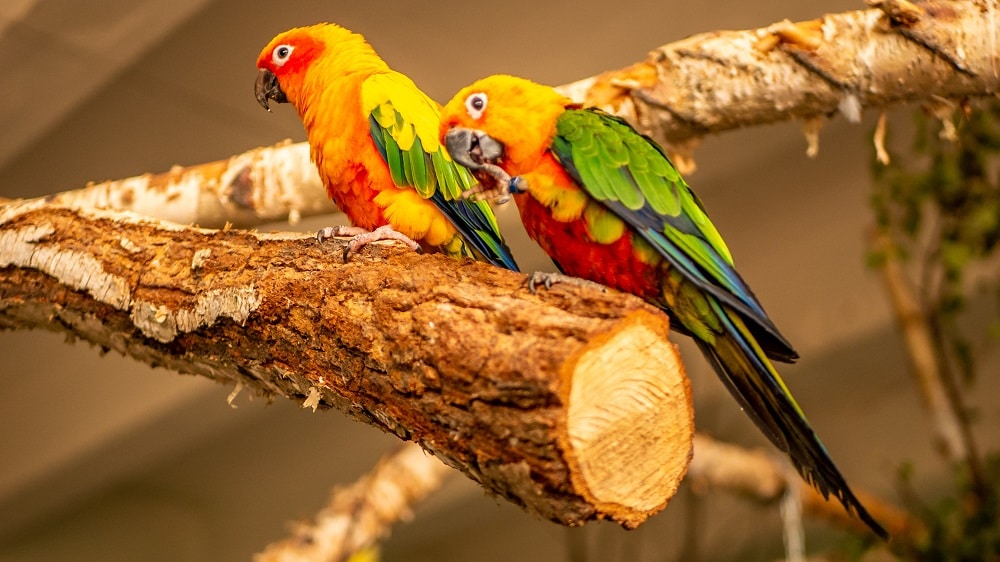 Looking to add a conure to your family? Great choice! There are many different types of conures out there, all of which can make wonderful pets for the right person. If you’ve narrowed it down to a jenday conure vs sun conure, you may be wondering what the differences are between these two colorful South American parrots. They look similar – but are they?

Keep reading for everything you need to know about jenday conure vs sun conure, both in wild birds and as pets!

Jenday conure vs sun conure: Same species or not?

Let’s have a look at the taxonomical intricacies surrounding these parrots first. The whole jenday conure vs sun conure debacle can get a bit confusing, so brace yourself! Scroll down to the next section if you just want to know about their visual and personality differences.

In short, the two are not the same species. However, they really are very similar, and it can actually be difficult to tell them apart. Both are members of the genus Aratinga, and until recently, it was in fact thought that jendays (Aratinga jendaya) were a subspecies of sun conures (Aratinga solstitialis).

Although they’re considered separate species now, both still belong to the same scientific complex (a collection of very similar species). It’s named the Aratinga solstitialis complex, after the sun conure. The other members of this group are the gold-capped conure (Aratinga auricapillus) and sulphur-breasted conure (Aratinga maculata). These are less common in the pet trade, but also very similar to suns and jendays.

Surprise! As if things weren’t complicated enough already: because sun and jenday conures are so closely related, they can interbreed. It likely doesn’t happen in the wild because their natural habitats don’t overlap, but it’s sometimes done by parrot breeders. The result is referred to as a “sunday” conure.

Sunday conures can be difficult to distinguish and are often mislabeled. Generally speaking, they’ll carry less green on their wings than a jenday but more than a sun. The belly color is often deep orange-red and can extend to the head. In some pictures I’ve seen, there’s also some green on the belly and the head.

This is the part where you’ll have to pay very close attention if you want to be able to tell these two conure species apart. There are some differences, but they’re subtle. It doesn’t help that adults and juveniles don’t look the same, nor that breeders have developed selectively bred color variants like ‘Red Factor’, pied and ‘High Yellow’ sun conures.

Here’s what to look out for:

Although both jenday and sun conures are naturally found in South America, their natural distribution zones aren’t entirely the same. Sun conure distribution is limited, with them mostly being known from a few areas in the northern tip of Brazil, part of Guyana and maybe slightly into Surinam and Venezuela. They inhabit savannah lands and forested areas and are considered endangered.

Jenday conures are naturally found in northeastern Brazil, in an area much wider than that of their sun cousins. They prefer forests and are not considered threatened.

Just to be clear, jenday and sun conure noise levels are similar: LOUD. Some parrot enthusiasts say they can’t hear much of a decibel difference, but many report that their jendays are slightly less loud than their suns.

All parrots from the genus Aratinga are known to produce ear-piercing screeches, so that’s definitely something to keep in mind if you’re interested in keeping one.

One of the main reasons both jenday and sun conures are so popular as pets is due to their fun personalities. They may be small (both around 30 cm/12″ from head to tail tip), but they can definitely become true members of the family.

Aratinga conures are known to be intelligent, eager to learn tricks, funny, expressive, energetic, and, of course, vocal. A well-socialized sun or jenday will also be affectionate, social and love to hang out with its humans. They need a lot of attention daily! Ignoring your conure’s social and other needs can cause severe stress and even behavioral issues like biting, excessive screeching and feather plucking.

Although their diets may vary slightly in the wild due to their different natural distributions, both jenday and sun conures feed on a variety of fruits, nuts, legumes, seeds, flowers and all sorts of agricultural crops. In the home, they can be fed identical diets.

You can feed your conure a base diet of high-quality pelleted food and supplement with fresh veggies and occasional fruits. Seeds are also a good addition, especially if they are sprouted. For added variety, you can feed small amounts of cooked grains like rice and pasta as well. More information can be found in the full article on parrot diet!

Jenday and sun conures are both long-lived, making adding one to your family a long-term commitment. As mentioned in the post on sun conure lifespan, it’s not uncommon for them to reach up to 20 years in age. Even 30 isn’t unheard of.

I just want to reiterate that despite the fact that they’re officially recognized as different species nowadays, these two parrots really are very similar. You can go for whichever of the two comes to you first, especially if you’re rescuing. With good socialization and plenty of bonding, you’ll have a friend for decades to come, no matter if it’s a jenday, sun or sunday conure.

If you have any more questions about jenday conure vs sun conure, how to tell them apart or which is the right parrot for you, feel free to leave a comment below. If you’ve owned either of these parrots before, also be sure to comment and share your experiences!

12 thoughts on “Jenday Conure vs Sun Conure | With comparison chart”