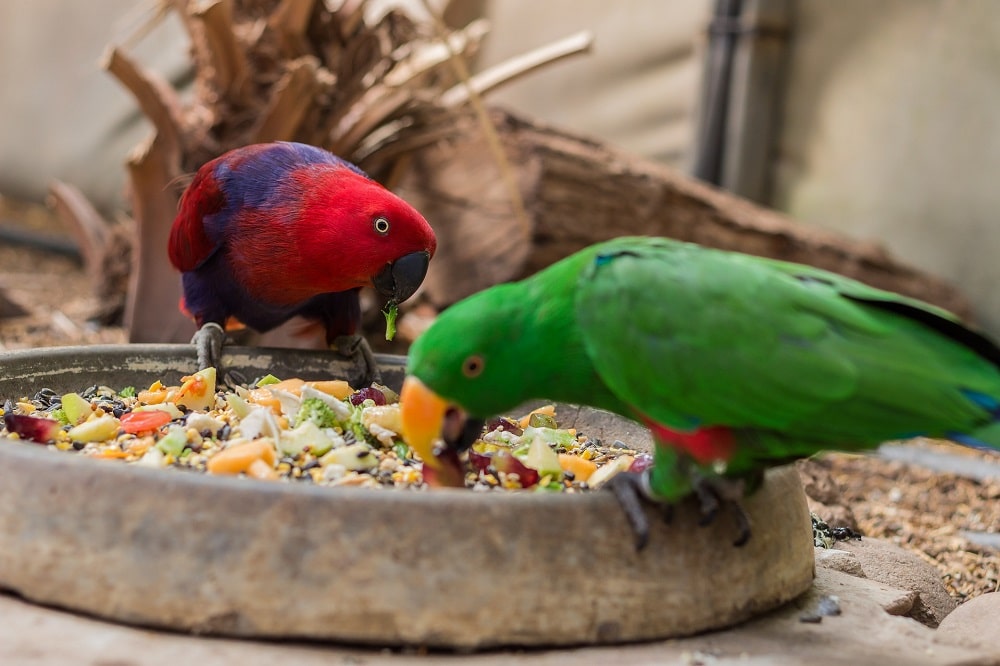 If you’re a parrot owner trying to make sure your bird is getting enough veggies, you’ll sometimes run into something that makes you doubt. Is it safe? There’s a lot of fear-mongering and repeating of dubious “facts” out there! In order to help out, I’ve compiled a list of the vegetables I most frequently get asked about and whether they’re parrot-safe or not.

Keep reading to find out which common vegetables are safe and unsafe for parrots.

Yes! Although it’s often recommended to keep the quantities small (like just a slice, or half a cherry tomato). Tomatoes can be on the acidic side, which for some parrots can upset their digestive system if they eat too much.

Yes, cucumber is fine for your bird. It’s not very nutritious and it contains a lot of water (which can cause loose poops), but many parrots do like it.

Can a parrot eat potato?

Raw potato is obviously not safe for your parrot, as it’s toxic (to both birds and humans). Cooked potato is another story: as long as you don’t use salt, it should be safe. Not something you want to feed in large quantities because it’s so starchy, but definitely a great option to add some variety to your bird’s diet.

And yes: sweet potato is safe too, as are yams.

Yep! Like cucumber, it’s not the most nutritious option and it’s very watery, but some birds go nuts for it (like the budgies here at Psittacology headquarters). Celery leaves are also safe and actually contain more (micro)nutrients.

Yes, and it’s a great option for them. Go for the larger, chunky carrots if you can find them: they tend to contain less sugar and half a carrot can keep your bird busy for ages.

Your parrot can also eat parsnip, which is a close relative of the orange carrot.

Controversy alert! Some sources list asparagus as completely safe for parrots, while others warn that it can cause extreme stomach upset or even death due to a compound named asparagin.

Most settle in the middle, noting that asparagus can be difficult for a parrot to digest. If you do feed it, start with a small amount and don’t overdo it. Or avoid it entirely, as there are plenty of other safe veggies!

Radishes are safe, as are radish tops and radish sprouts. Parrots can also eat daikon or winter radish, a big white root vegetable.

Much to the dismay of local farmers, wild parrots raid corn crops if they get the chance (Galetti, 1993). It’s also one of the main ingredients in many pelleted parrot foods, as it makes for a cheap filler. Still, it’s a somewhat controversial food!

It has been posited that corn is digested slowly, which can give yeast a chance to grow in your bird’s crop. That being said, unless your parrot is eating a lot of corn, it’s unlikely to cause any issues. You can offer it on the cob, cooked/microwaved, or go for (thawed) frozen corn. As mentioned in the post on fun recipes for parrots, you can even feed plain popcorn.

Kale is often placed on the list of veggies that you shouldn’t overdo due to its oxalic acid content. Oxalic acid can interfere in calcium absorption. This is problematic because plenty of calcium is important to keep your parrot happy and healthy.

Interestingly, though, the oxalic acid content in kale isn’t actually as high as some make it out to be. Harvard’s School of Public Health lists it as ‘Very Low’ at 2mg per 100 grams. Compare that to the Very High of raspberries, which contain 755mg in half a cup! So we’d say: knock yourself out. Kale is nutritious and many parrots love leafy greens.

Are you tired of the controversial veg yet? Opinions on eggplant vary from never (due to intestinal upset) to cooked being fine.

A compound named solanin tends to be named as the culprit for runny poops and similar issues after ingestion of eggplant, but many parrot owners say they haven’t seen problems. A cooked piece here and there is unlikely to cause any issues, though many parrot owners prefer the principle of ‘better safe than sorry’.

Yes. Like kale, cabbage is a victim of being mislabeled as high in oxalic acid when it really isn’t. You can feed any type of cabbage, including Brussels sprouts.

Bell or chiles? Actually, it doesn’t matter. Parrots can eat both and many love them.

Birds don’t have receptors for capsaicin, the compound that gives hot peppers their spice. The only part that can cause issues is the stem, as peppers are members of the nightshade family. Remove that part and let your parrot go to town on a regular bell pepper or something spicier… just don’t let it come up to you for a kiss afterwards!

Other safe vegetables for parrots

The above are only the veggies I frequently get asked about. There are a lot of other options! The below are just some more examples of vegetables that you can offer to your parrot.

Onions are not considered safe for parrots. Your bird won’t keel over if it gets into some onion on the counter, but it can cause gastrointestinal upset. Onion in a very concentrated form, like onion powder, can have stronger effects. If fed on a regular basis, onions can cause anemia (Lightfoot & Yeager, 2008).

Leeks, chives, shallots, and the like are also alliums.

Garlic is also an allium, so the same concerns apply.

Sure, avocado is a fruit, but since it’s often used in veggie-based dishes like salads, let’s include it. This is one of the foods you’ll see on every ‘unsafe’ list.

In 1989, scientists force-fed avocado to eight budgies and eight canaries, leading to the death of six of the budgies and one canary (Hargis, Stauber, Casteel & Eitner, 1989). Not the most charming experiment, but the finding of various severe issues in the postmortems definitely underlines that it’s better to keep your bird away from this green fruit.

Another candidate for controversy! In celebration of ‘better safe than sorry’, you might want to opt for something else to feed to your parrot. You can read more in the article on parrots and mushrooms.

The leaves are toxic to humans and parrot. The stalks are safe when cooked thoroughly, but high in oxalic acid. You might as well avoid this one if you’re worried.

As you’ve hopefully concluded from the above, loads of your favorite vegetables are suitable for a snack or parrot chop. So if you’re preparing them for yourself, don’t forget to share!

If you have any more questions about parrot-safe vegetables or if you’d like to share your own experiences with parrot diet, don’t hesitate to leave a comment below. This also applies if I forgot a veggie and you’d like to see it on the list.

8 thoughts on “Can Parrots Eat…? 26 Vegetables Safe For Parrots”