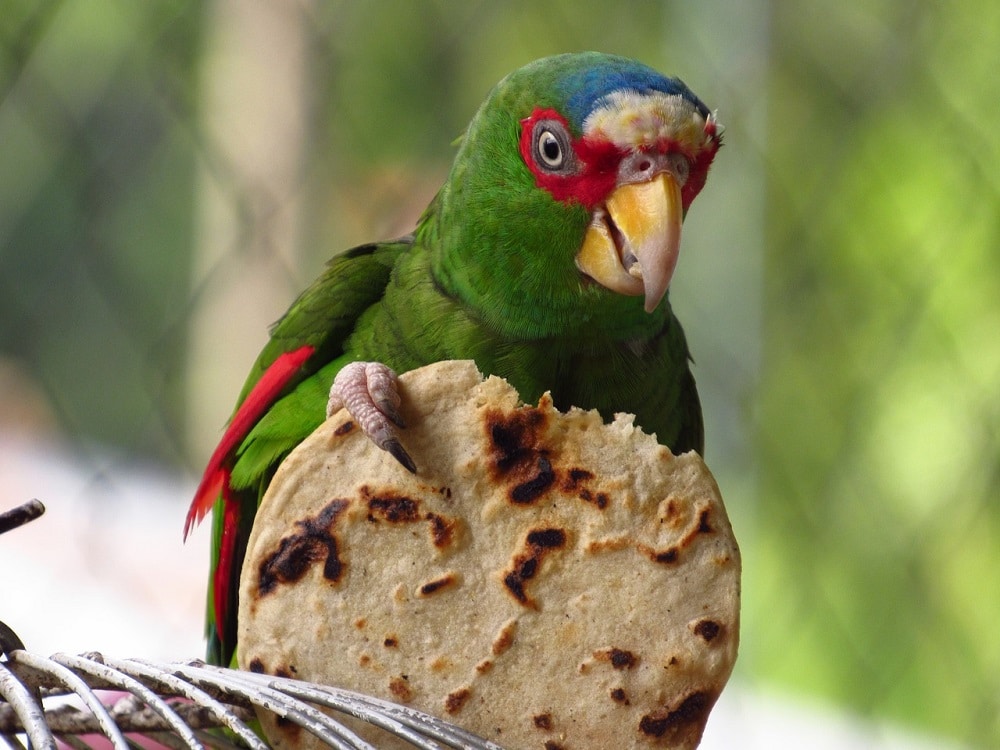 If you own a parrot, you’re probably well aware that there’s nothing that attracts our feathered friends more than human foods! Why eat healthy pellets when you can have Doritos, pancakes and french fries, after all? Although whatever we put in our mouths is automatically extra attractive to our birds, that doesn’t mean that it’s good for it.

I receive loads of questions about whether parrots can eat certain human foods. Let’s go into the ones I get asked about the most and whether your bird can have some or not!

We’ll start off with 14 human foods that your feathered friend can eat. Note that I said can, not should – in many cases, you shouldn’t offer more than a crumb or two. Just enough to satisfy its curiosity or to not have to worry if your bird gets into something you left on the counter! Human foods tend to just be much too fatty, sugary or salty.

If you’ve run out of food for your feathered friend and the shops are closed, have a look at the articles on parrot-safe vegetables and parrot-safe fruits instead. Those are much more suitable to hold your bird over until you can get a bag of pellets. Have a look at the full article on parrot diet if you’re not sure what your bird’s daily meals should look like.

Can a parrot eat french fries?

Parrots can eat cooked potato, and this extends to french fries. So yes, your feathered friend can have a bite, but for obvious reasons, shouldn’t have more than a tiny bit.

For most, half a small fry is more than enough. This stuff is much too fatty and salty to feed in larger quantities.

Yes. Although parrots are almost exclusively herbivores, including a little egg in their diet from time to time can be beneficial. Scrambled or boiled is fine, as long as you don’t use salt or oil.

Give laying hens a bit more and include the shell, so she can choose to consume it if she’s in need of extra calcium.

Cheese isn’t exactly the prime choice if you’re looking for something to feed your parrot. This especially applies to soft cheeses, which are very rich in lactose. Since parrots don’t produce the lactase needed to break down lactose, this can lead to diarrhea.

Hard cheeses contain less lactose. You can offer a tiny piece if your bird shows interest, but dairy products shouldn’t be part of its daily diet.

Yes. A little bit of lean, cooked chicken from time to time isn’t bad for your parrot. You can include a shred here and there, but it shouldn’t be part of its daily diet. They just don’t need that much protein.

Popcorn can actually be a perfectly healthy snack for your parrot. It’s even on my list of fun recipes for parrots!

Just remember that it should preferably be air-popped, or at least not contain the copious amounts of sugar, salt and oil that microwave or pre-bagged popcorn does.

Although PB is very high in fats, your parrot can have a little bit. The ideal would be an all-natural brand, preferably one without salt.

Some parrot owners like to use peanut butter to get their birds used to new foods or other items: just apply a little bit of PB and it instantly becomes irresistible!

Your bird won’t drop dead if it takes a bite out of an olive. These fruits don’t contain any toxic substances, which is why they’re on the list of parrot-safe foods.

However, you don’t have to be a parrot expert to understand that olives are much too salty, and sometimes oily, to make for a suitable addition to your parrot treat arsenal.

Like eggs and chicken, cooked shrimp is parrot-safe. You can share a bit of plain shrimp with your feathered friend if you want to. Just don’t make it a daily thing!

Oatmeal made with water or an unsweetened plant-based milk type is actually not that bad as a parrot food. It doesn’t even have to be cooked: raw oats are also fine.

Some people like to include oats in their parrot chop recipe, as they’re great for soaking up some excess liquid.

Whether bread is on the “more or less fine” or “fine” list depends a bit on where you’re located and the type of bread we’re talking about. Bread in the United States tends to be higher in sugar and preservatives than in Europe, for example, and dark bread is less unhealthy than white.

In any case, yes, your parrot can have a few crumbs. Just don’t go serving it slices at a time.

A little lick of yogurt won’t harm your bird. Just don’t feed to much, because although yogurt is naturally low in lactose, dairy products in general aren’t really suitable for parrots to eat.

Yep! Pumpkin seeds contain healthy oils and most parrots go absolutely crazy for them. They are quite fatty, though, so your bird shouldn’t have more than one or two. Break them apart to use as training treats, for example.

Remember that unsalted, unroasted seeds are preferable. The best option, though, would be scooped straight out of a pumpkin with the flesh still attached!

Can a parrot eat rice?

Yes, cooked or soaked grains like rice are fine for your bird. They shouldn’t be a staple food, but they can absolutely be included in parrot chop and food mixes.

Try going for brown or black (forbidden) rice, which is higher in fiber and micronutrients than normal white rice.

Like rice, pasta is often included in parrot chop mixes. It’s mostly made of grains (wheat flour with some egg), after all, which is fine for our feathered friends to eat. It shouldn’t be treated as a staple food, though, and don’t forget that whole wheat is superior.

You can also go for gluten-free alternatives like corn pasta or lentil pasta.

The main human food you should keep away from your bird is chocolate. It’s toxic to birds, especially dark chocolate. So no chocolate chip cookies, Nutella or other chocolatey goodness for your feathered friend: you can keep it all to yourself.

Other foods that are considered toxic to parrots include avocado, alliums (like onion and garlic, especially in concentrated, powdered forms), coffee and dried beans. It goes without saying that alcohol and other stuff that’s meant for humans to have fun goes on this list as well. Mushrooms are a source of discussion.

If you have any more questions about what your parrot can and can’t eat or want to share your own experiences, don’t hesitate to leave a comment below!

4 thoughts on “Can my parrot eat…? 14 human foods safe for parrots”