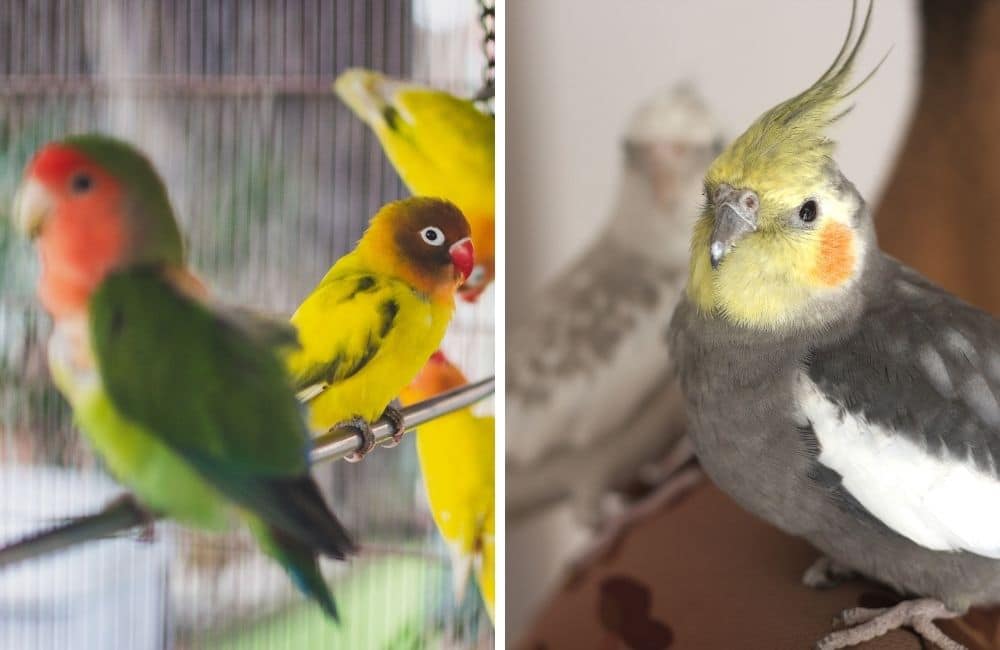 Are you thinking about adding a parrot to your family but stuck between going for a cockatiel or a lovebird? Not surprising! Both are among the most popular pet parrot species for a reason. But which is best for you?

Let’s go into the differences and similarities between cockatiel vs lovebird to help you figure out which species suits your family best.

Unlike some other popular pet parrot species, cockatiels and lovebirds don’t have much in common. Both make great pets, but their appearance, personality and other factors are quite different. It’s important to consider what you’re looking for in a bird before you take the plunge.

Below, we’ll discuss a few of the most prominent differences between lovebirds and cockatiels.

Who is a cockatiel better for?

In my opinion, cockatiels make better beginner birds than lovebirds. They’re simply a bit more forgiving; ending up with an untame cockatiel usually won’t get you bitten as often as when you end up with an untame lovebird (although there are always exceptions). Cockatiels are family-proof and a well-tamed one will be friendly and cuddly.

Cockatiels do need a bit more space and their powder down can be bothersome if you have allergies. Some folks opt for an air purifier to keep things under control.

Who is a lovebird better for?

If you’re looking for some spunk, you’re probably the right candidate! Lovebirds are great for people who want a bit of life in the house and enjoy taming and training exercises. There are more different color varieties available and also more species to choose from.

A lovebird can be a wonderful friend, especially if you have kept parrots before.

Having kept both cockatiels and lovebirds, I personally can’t say I have a clear preference. It just depends on my mood; both make great pets and can be very cuddly. That being said, if you’re looking for your first feathered pet, I would generally recommend a cockatiel.

If you go for a lovebird, it may be a good idea to find a breeder who pays individual attention to their birds, so you hopefully end up with a well-socialized parrot. Skittish pet store lovebirds and cockatiels can both lash out due to fear, but lovies are definitely feistier and can be more difficult to tame.

Still not sure which parrot species to go for? Check out the other parrot comparison guides to help narrow it down.