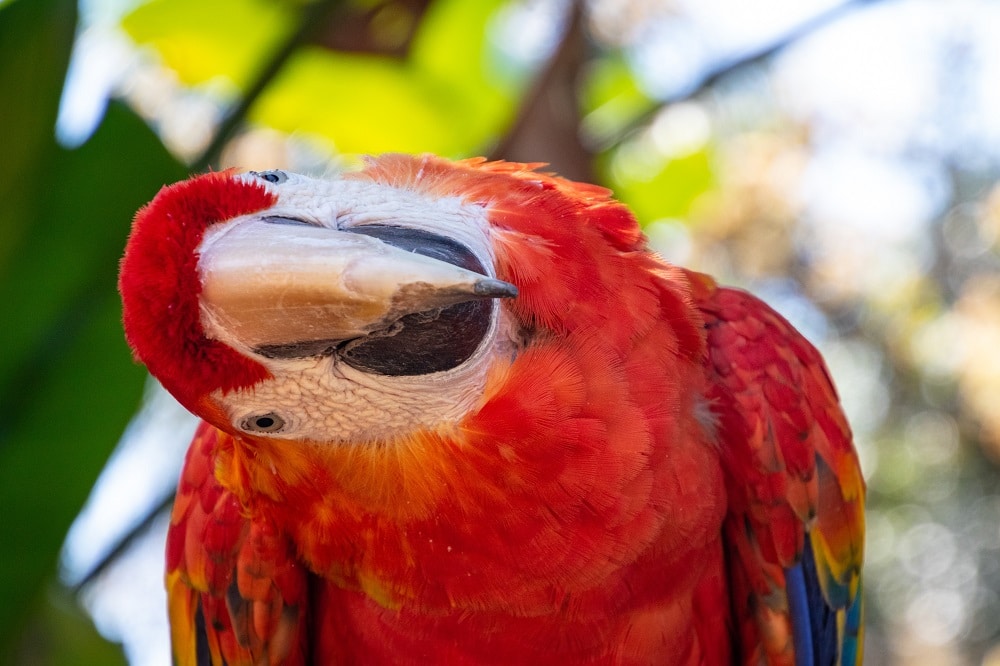 If you’re interested in adopting a macaw and have heard stories of parrots living for over 100 years, you might wonder how long you can expect your feathered friend to be around. How long does a macaw live? Can they really outlive you?

Let’s go into macaw lifespan in the wild and in captivity, as well as what you can do to make sure yours lives a long and happy life.

How long does a macaw live in the wild?

The short version: sorry, we’re not really sure! First off, there are about 15 species of macaw currently roaming the rainforests and woodlands of Central and South America. All of these may have somewhat different average lifespans in the wild.

It’s a bit difficult to figure out the wild lifespan of any bird and that especially applies to the more elusive ones. Some species of macaw have few individuals (< 1000) left, which makes tracking and studying them important but pretty challenging.

Take a 2017 article by Maestri, Ferrati & Berkunsky as an example: they studied a critically endangered macaw species, the blue-throated macaw (Ara glaucogularis) and didn’t even have info on how long they live in the wild. Not very helpful!

In any case, what we do know is that even in the wild, a macaw can be expected to live a pretty long life. Sources vary greatly in their estimations, citing a potential lifespan of anywhere between 20-60 years. The average lifespan is probably unfortunately shortened due to human activity such as deforestation.

How long does a macaw live in captivity?

Some sources report that on average, macaws don’t live longer in captivity than in the wild. This is not completely surprising: although things appear to be improving somewhat in recent years, many are still subjected to less than ideal conditions in the pet trade and at our homes.

So how long does a macaw live if you provide excellent care? If you’re familiar with Psittacology’s articles on parrot lifespan, you’ll know that we try to keep things scientific rather than relying on random sources. That’s why we often cite a study named Survival on the Ark. Although the numbers in this study are based on parrots in zoos rather than homes, at least it gives us some information on documented birds, not just unverified reports.

Let’s take a peek at the numbers, shall we? I also included numbers listed by Wikipedia, which are based on different sources of varying trustworthiness.

It’s interesting to see above that the potential lifespan listed on Wikipedia almost always exceeds the highest age noted in the Ark study. This is even though in most cases, the Ark study included hundreds of birds of each species, so it should be reasonably accurate. Do we tend to overestimate these birds’ lifespans? Or did the birds in the study receive subpar care? It’s difficult to say, as the more anecdotal evidence is hard to trace.

In any case, you can expect your macaw to be around for a good while. And yes, “a good while” could potentially be more than 60 years! 30-50 is also not too exceptional. Many folks include theirs in their wills to ensure they’re well cared for if they happen to outlive their owners.

Will the oldest macaw please stand up? Undocumented parrots have been listed as being over 100 years old (see Charlie the supposedly 114-year-old blue-and-gold, who was falsely reported to have been Winston Churchill’s pet). The oldest documented macaw, named Poncho, was apparently 90 in 2015.

Okay, so: a macaw can potentially live for a very long time. That being said, a lot of them don’t. In fact, as mentioned earlier, they sometimes live even shorter in captivity than in the wild! Why is that? Well, insufficient care and ignorance about their needs play a big role.

As with all parrots, many (beginning) enthusiasts dive into owning a macaw without proper preparation. They might fail to search for information about topics like diet, housing and socialization, all of which are crucial in keeping a macaw happy.

As such, rather than continue talking about potential lifespan, let’s go into what you can do to make sure yours lives a long and happy life!

Did you know? If your macaw does make it to an impressive age, or if you adopt an older macaw, you should consider the effects of age. It has been reported that old macaws often suffer from age-related health issues, notably cataracts.

Care recommendations for a long life

Don’t forget: Large parrots like macaws often end up being rehomed multiple times during their life, the stress of which could very well affect their lifespan. Please, consider adopting and make sure you’ve got all your ducks in a row before taking on the responsibility.

How old is my macaw?

If you adopted your macaw, the organization or previous owner might not know its age. If you do want to figure it out, your best bet is to try to obtain some documentation.

With how expensive these parrots tend to be, there is often paperwork involved, as well as potentially a leg band that states the hatch date. Try to see if you can get in contact with the previous owner(s) to do some backtracking!

If your macaw doesn’t have a leg band and you can’t find any documentation, that makes things a lot more difficult. You’ll only be able to tell if your macaw is a juvenile or not. Once they reach maturity, there unfortunately just aren’t really any physical indicators of age.

In order to figure out whether your macaw is still a youngster, you can take a peek at its eyes. If they are (almost) completely dark, you’re dealing with a non-mature bird. Are white iris rings present? Based on this, you can be relatively sure it’s at least older than a year, because the white irises take 1-3 years to show up.

So, how long does a macaw live? Well, potentially a long time, although it’s sometimes still a little unclear. At least 25 years should be attainable for a pet macaw, with more extreme ages popping up as well!

If you have any more questions about macaw lifespan or if you’d like to share your own experiences with these amazing new world parrots, don’t hesitate to leave a comment below.

18 thoughts on “How Long Does A Macaw Live? All About Macaw Lifespan”