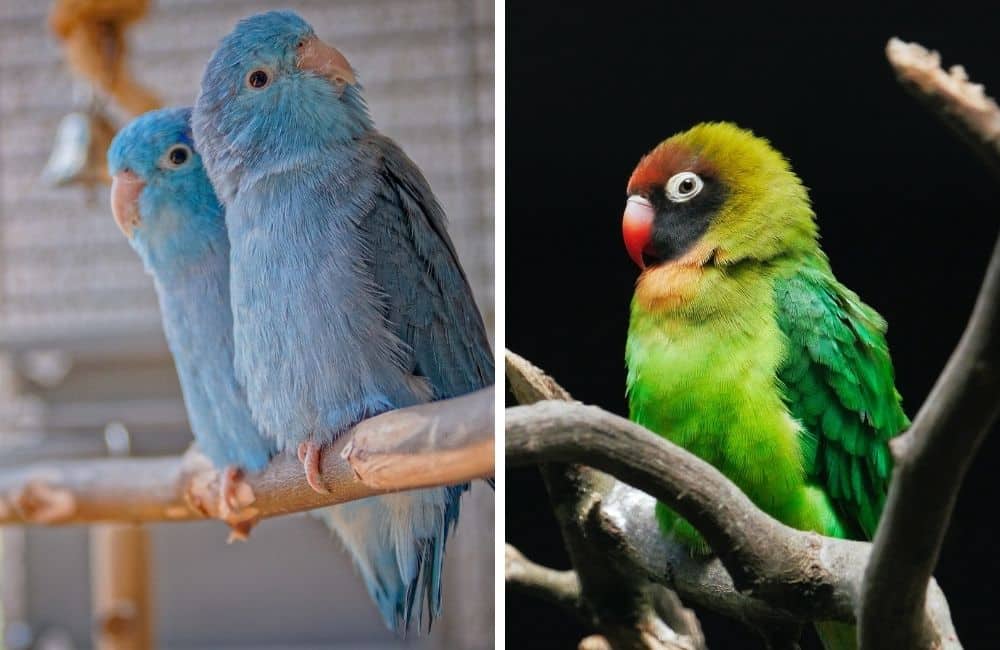 Thinking about adding a small parrot to your family but stuck between parrotlet vs lovebird? Not surprising! Both of these colorful birds can make wonderful pets, but despite their visual similarities, they’re actually quite different.

Keep reading to find out everything you need to know about parrotlet vs lovebird to help you choose the right parrot for you!

Parrotlet vs lovebird: The differences

Parrotlets and lovebirds look alike quite a bit. Both species are very small, colorful parrots. Although lovebirds are more commonly kept as pets than parrotlets, both are pretty common, and parrotlets are actually sometimes referred to as “the lovebirds of South America”.

However, although they may seem similar at first glance, there are actually a lot of differences between parrotlet vs lovebird. To help you choose between the two, here are the main points on which they differ:

Despite their visual similarity, parrotlets and lovebirds are two completely different species. “Parrotlet” is the common name for three bird genera: Forpus, Nannopsittaca and Touit. All of these are naturally found in the New World (Central and South America).

The most common species of parrotlet to be kept as a pet is the Pacific parrotlet (Forpus coelestis). We’re going to assume that’s the species you’ll be going for, since the others really aren’t seen in aviculture that much.

Given the fact that parrotlets and lovebirds hail from completely different continents, it’s not surprising that their natural habitats aren’t quite the same.

Although some species of parrotlet prefer (semi-)open zones, the Pacific parrotlet is mainly found in forested regions. The species favors drier habitats, but is also found in more humid woodlands.

Lovebirds are generally not forest species. They come from the African savannahs and grasslands, which tend to be open and shrubby, interspersed with only the occasional taller tree.

Although both are pocket-sized parrots, parrotlets beat lovebirds in terms of being minuscule. The Pacific parrotlet clocks in at a maximum of only around 30 grams, making it smaller than some budgies! From beak to tail, these birds measure around 14 cm/5.5″.

Lovebirds are still tiny and fragile, but at 45-55 grams, they tend to weigh almost twice as much as parrotlets. Their length is similar to that of a parrotlet: the peach-faced lovebird is the longest among them at about 18 cm/7.1″. They’re just chunkier and more robust!

Although parrotlet vs lovebird personalities have some things in common, there are more differences than similarities. Both species can be described as “feisty” and can be prone to nipping without proper socialization, but parrotlets are a bit more exaggerated than lovebirds. Both are also good candidates for learning tricks.

A (well-socialized) lovebird is great for someone looking for a cuddlebug. These guys are active and intelligent, but they will also want to spend plenty of time hanging out with their owner and receiving head scratches.

Parrotlets are also social, but they’re more territorial than lovebirds, often seeming to think of themselves as weighing 300 grams rather than 30. They need more stern training to keep them under control. On the flip side, you’ll get a parrot that’s always on the go and a great little “partner in crime”.

Let me start, as always, by saying that if you’re looking for a quiet pet, you may want to head over to Psittacology’s sister blog FantaSEA instead and learn about aquariums. Parrots are just loud!

This being said, generally speaking, parrotlets are quieter than lovebirds. Lovies have a pretty shrill flock call and spend much of their day making noise, while parrotlets don’t seem to vocalize quite as often.

You can compare their calls on Xeno-Canto:

Speaking of noise, what about talking? Well, it has to be said that neither species is on the list of the best talking parrots. As discussed in the article on lovebird talking, the most you’ll be hearing from most Agapornis individuals is a clunky rendition of a single word or short melody.

Parrotlets are a bit better, and they can actually learn some words and short phrases. However, they’re no African grays, and anyway: you should never get a bird just because you want it to talk. Many never do!

Both parrotlets and lovebirds have long been selectively bred to produce all sorts of different colors. A wild-type Pacific parrotlet is green with hints of blue, but domestic ones are often blue. They can also be yellow, white, or pied.

Since there are more species of lovebirds available in the pet trade, it’s not surprising that there are more colors as well. Breeders also just seem to work with lovebirds more extensively than with parrotlets. Genetically speaking, there appear to be more options with the former.

Each popular lovebird species will come in a whole bunch of different colors. There’s white, blue, green, grey, yellow, pied and every combination of these you can think of! Some colors and patterns are obviously more rare and difficult to find than others, but if you’re willing to put down the $$$, the options are endless.

Parrotlet vs lovebird: The similarities

(Grass) seeds form a large percentage of both parrotlet and lovebird diet.

Parrotlets especially will also eat a range of other foods, like berries and fruits, but both species can be classified as seed eaters. In captivity, they can be fed a similar diet consisting of a pellet base supplemented with (sprouted) seeds and plenty of fresh produce.

With good care, as well as a dose of good luck, both parrotlets and lovebirds can be expected to live for up to 15-20 years. The oldest recorded individuals for both species were over 30 years old!

This means that, like all parrots, these birds are long-lived. Think about whether you’re ready for a decades-long commitment before you bring one into your home. Will you still want to be a parrot owner in 10 years?

Yep, as mentioned briefly in the section on personality, both these parrots are absolute pocket rockets. They’re tiny, but they definitely won’t ever let you forget they’re there! They like to fly, climb, explore, play, destroy and much more.

Because parrotlets and lovebirds are such high-energy creatures, they require a roomy cage. They should also be able to spend plenty of time outside their cage in a parrot-proofed room. Offer lots of parrot toys and keep your bird busy with things like foraging boxes, but don’t be surprised if it still ends up chewing up some of your furniture.

Don’t let their small size fool you: both parrotlets and lovebirds are wicked smart. They can figure out simple puzzle toys, learn surprisingly complicated tricks and are very eager to put their brains to work. They quickly learn to recognize people and will remember routines.

Because they’re so intelligent, both species also tend to get bored easily. To prevent stress due to boredom, do regular training sessions. Provide foraging toys for your bird to figure out or destroy, and regularly introduce new things into the cage to keep things exciting.

Who is a parrotlet better for?

If this is going to be your first parrot, it’s generally not recommended to go for a parrotlet. Sure, these guys can make absolutely lovely pets, but they can also be a handful. It really helps to have previous experience in training a parrot and good insight into how these birds work.

If this isn’t your first parrot, I’d choose based on personality. Although lovebirds are inquisitive and active, parrotlets are generally just plain bold. Perfect if you’re looking for a large parrot like an Amazon (which are closely related to parrotlets, by the way), but in a small package.

Noise can also be a consideration. It has to be said that you can always get a loud parrotlet or a quiet lovebird, but generally speaking, it’s lovies that produce more shrill screeches and vocalize more often.

Who is a lovebird better for?

Although lovebirds do need plenty of socialization to prevent them from getting nippy, a tame lovie is an absolute joy. They’re affectionate and tend to like to cuddle or hang out, but they’re also drama queens and full of silly antics. You’ll never be bored with an Agapornis in your home!

Although you still need to do plenty of research to make sure your bird gets what it needs, I’d say lovebirds are suitable as first-time parrots.

Whether you ultimately end up going for a parrotlet or a lovebird, you’re likely to end up with a fantastic little pet.

Be sure to learn as much as possible about caring for your chosen species before taking the plunge! Parrots do need special care and are very different from dogs and cats.

If you have any more questions about parrotlet vs lovebird or if you want to share your own experiences with either of these fantastic little parrot species, don’t hesitate to leave a comment below!