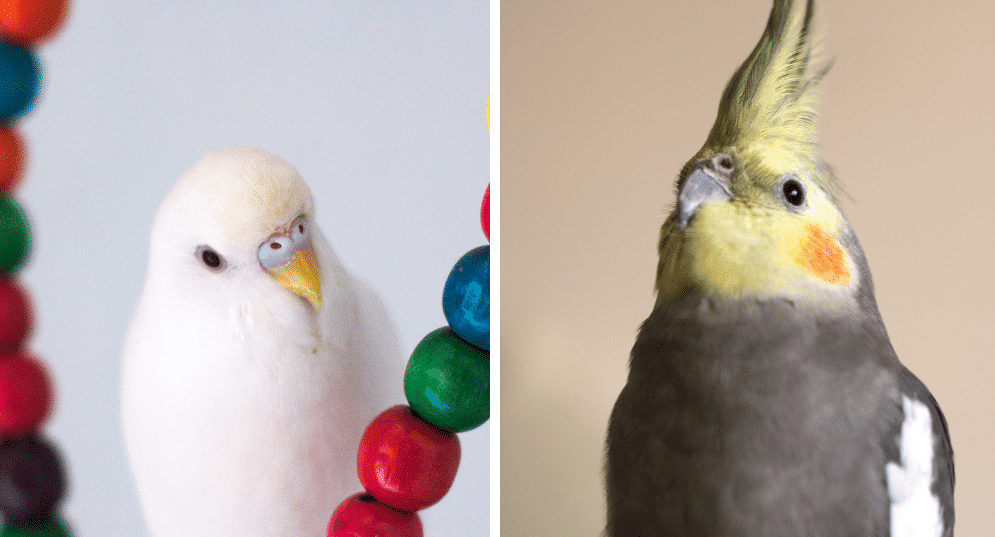 If you’re looking for a feathered companion, there’s a good chance you’ll end up narrowing it down to either a budgie or a cockatiel. No wonder: they’re the two most popular pet birds out there. But between budgie vs cockatiel, how do you know which species is right for you?

Let’s go into budgie vs cockatiel and hopefully help you figure out the bird for you.

There are plenty of similarities between budgies and cockatiels. For starters, they actually naturally occur in the same country. In fact, in the wild, they’re actually spotted foraging and drinking together on occasion.

Both species hail from Australia, where they inhabit rather harsh and arid habitats. This is probably why both of them have become so popular: they can survive under less than ideal conditions, which is unfortunately what both are often subjected to in captivity.

Some other similarities include:

Both cockatiels and budgies are commonly misunderstood. Due to their wide availability they’re seen as throwaway pets, or easy pets that just need a small cage and some seed to thrive.

Lamentably, literature often unjustly considers cockatiels (N hollandicus) and budgies to be “beginner birds”—birds for people to get first, to learn enough about living with psittacines. It is intimated that the people will then graduate up to get “a real parrot.” This attitude-does a tremendous disservice (…)

Although there are quite a few similarities between cockatiels and budgies, there are also plenty of differences. It’s important to consider these before choosing one or the other!

Here at Psittacology headquarters, we have both budgies and a cockatiel. Both species are so much fun, full of personality and add their own special touch to the house. That being said, they do so in pretty different ways.

Did you know? If you’re looking for something in between, an English budgie might be a good choice. They’re larger and tend to be calmer than wild type budgies. They are more expensive and prone to health issues, though.

Who is a budgie better for?

In the end, it probably boils down mostly to the activity levels. A budgie is great for someone who wants to add life and chatter to their home and doesn’t mind that they won’t be able to snuggle much with their bird.

If you’re a high-energy individual who likes to play with their bird and is thinking about teaching it lots of tricks, you’re probably a budgie person. Cockatiels can learn tricks, but they just live in slow-motion compared to the budgerigar.

Some sources recommend budgies for kids and cockatiels for the elderly specifically, but I’m not sure if I agree. I think a pair of budgies would be a great pet for an elderly person! They always keep you on your toes with their antics.

Who is a cockatiel better for?

If you’re in search of a more chilled-out bird, the kind that will sit fluffed up and content on your knee for the entirety of a movie, chances are you’ll prefer a cockatiel. Sure, these birds will have their moments of hyperactivity, noise and flying around, but they’re not as high-energy as a budgie.

Because cockatiels tend to have a slightly shorter fuse than budgies, they might not make the ideal pet for children.

People often ask me if I love my cockatiel more, since I spend more time with him.

The thing is that although it’s nice to have a more cuddly bird that likes to spend hours on my shoulder, I adore the budgie flock just the same. I love their activity level, their antics and their mischievous shenanigans. I also like the constant stream of soft, happy chatter. They’re just so cheerful it’s infectious!

Whether you end up going for a budgie or a cockatiel, if you do your research and provide your bird with what it needs, I think you’ll end up being content about your choice. Both are great companions and just lots of fun.

If you have any more questions about budgie vs cockatiel or want to share your own experiences with these popular Australian pet bird species, don’t hesitate to leave a comment below!

Still not sure which parrot species to go for? Check out the other parrot comparison guides to help narrow it down.

3 thoughts on “Budgie vs cockatiel | Find the bird for you”