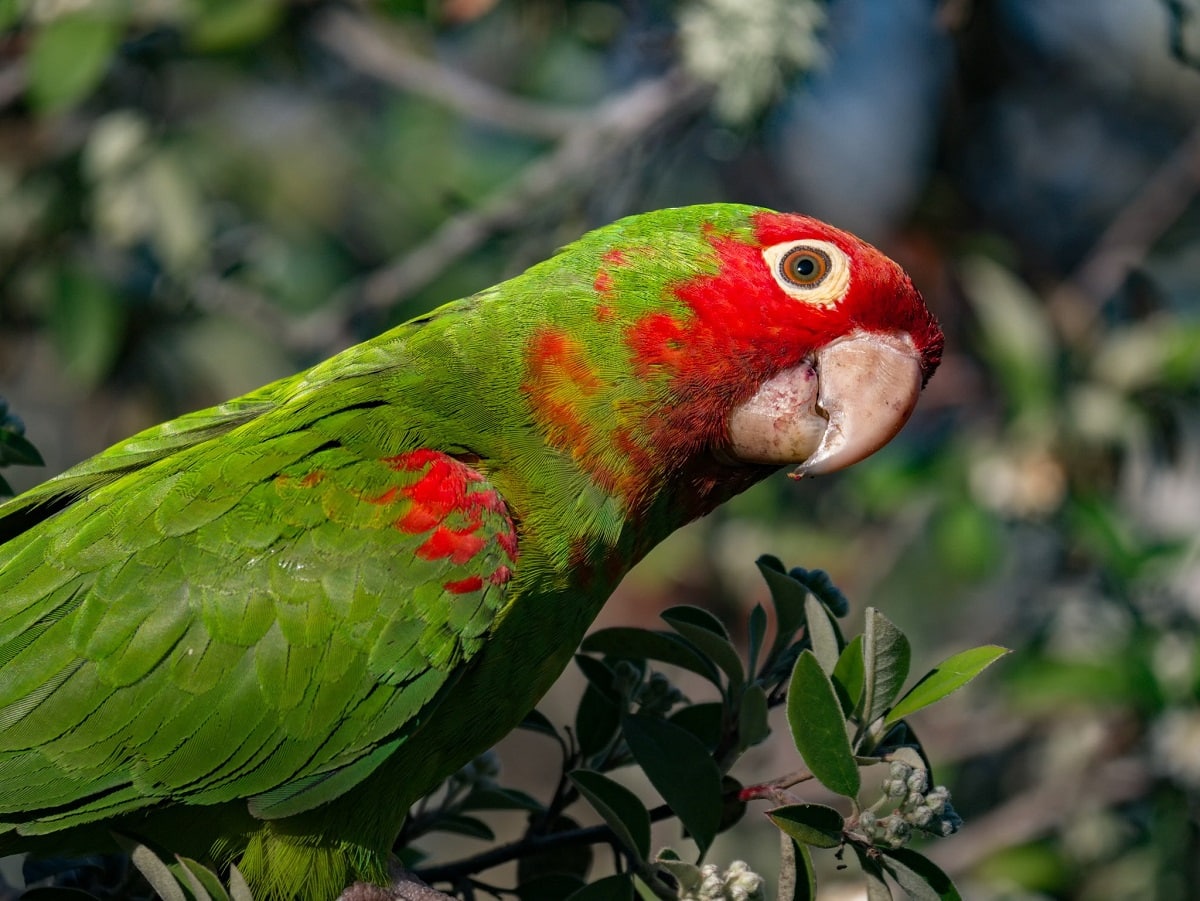 Do you like talkative parrots? Is your life lacking in shenanigans? Then the cherry-headed conure might be just the pet for you! Also known as the red-masked conure or red-headed conure, this is an intelligent and trainable medium-sized parrot. It’s one of the most talkative birds among the conure species.

If you’re thinking of getting a cherry-head, or if you want to know more about caring for this type of parrot, please read on.

Below, let’s have a closer look at how to recognize the cherry-headed conure, as well as its origins, diet, breeding habits and care.

The cherry-headed conure is native to South America. Here, the species found mainly in the area southwest of Ecuador to northwestern Peru. It naturally inhabits mostly jungle habitats, deciduous forests and desert regions with cacti, but is not shy of suburban areas at all either.

In its natural habitat, this parrot travels and roosts in flocks between a dozen to hundreds of birds strong. Some of these flocks are mixed, with parrots from different genera like Brotogeris and Pionus foraging alongside the conures.

Like a good bunch of other parrot species (Indian ringnecks and lovebirds are notable examples), this conure has also reached invasive species status in various countries as a result of pets being released or escaping. They’re now found in Spain, Puerto Rico, the US, Chile and Colombia, for example.

Because they’re quite adaptable, feral conures quickly reproduce, kicking native birds out of their nesting spaces and competing with them for food. The 2003 documentary “The Wild Parrots of Telegraph Hill” features a feral flock of cherry-headed conures in San Francisco!

Ironically, back in 1994, this species was actually classified as being at a high threat level for extinction in its natural habitat by the International Union for Conservation of Nature (IUCN). Currently, it’s still classified as ‘Near Threatened’.

Causes for the cherry-headed conure’s population decline include habitat decrease (think of increasing deforestation) and illegal trapping for the pet trade. If you’d like to buy one, make sure the breeder can produce proper documentation. And as always, we recommend adopting rather than shopping!

Did you know? The cherry-headed conure used to be classified in the genus Aratinga, which also contains the popular sun conure and jenday conure. However, based on DNA research, this genus was split and a bunch of the species moved to Psittacara in 2013.

The cherry-headed conure is quite popular in aviculture, mainly because of its pleasant temperament and beautiful bright colors. The most recognizable thing about this species is obviously that unique red splash of color on the face and head.

On the rest of the body, the feathers are mainly dark green, though red coloration pops up on the shoulders and underwings, plus in splotches on the neck. The brown eyes are surrounded by a white eye-ring. The feet are gray and the beak is horn-colored.

Juvenile cherry-headed conures have gray eyes and lack the red coloration on the head. They molt into their first red feathers after about four months.

Did you know? This isn’t the only green-bodied, red-headed species in the genus Psittacara. The mitred conure (P. mitratus) and scarlet-fronted conure (P. wagleri) are pretty similar. This can get confusing, especially when the birds are still young! However, only in cherry-heads, at least the adults, does the red color extend past the eyes.

Not too much is known about what cherry-headed conures tend to eat in the wild. However, it’s known they’re somewhat nomadic in their natural habitat, moving to and from more arid regions. Parrots of the World (2010) notes that this probably has something to do with food availability.

Foods this parrot has been reported to consume in the wild include fruits of Hieronyma trees (some of which are also eaten by humans), the cashew tree family Anacardiaceae, the olive family Oleaceae and Boraginaceae. It has also been spotted eating flowers of Erythrina trees, a genus in the pea family.

In captivity, you can feed your cherry-headed conure a standard parrot diet. Remember, the key to a healthy bird is variety! A high-quality pellet brand should work well as a staple, but like all parrots, your conure should receive plenty of fresh vegetables and some fresh fruits.

Other great additions to your bird’s diet include cooked legumes and grains, foraged foods and weeds like dandelion, as well as some (sprouted) seeds. Beware, though: this conure quickly becomes addicted to fattening seeds, such as sunflower and safflower. It’s best not to overdo it on the seeds.

This species is not among the smaller conures, so it needs sizeable cage. A minimum cage length of 36″/90 cm should work if your cherry-headed conure spends at least a few hours a day roaming freely. If you want to keep it caged round the clock, you’re going to need a large aviary or flight cage instead.

It’s important to supply multiple water and food bowls and to change the water on a daily basis. These parrots love to bathe! Many also like to be sprayed with room temperature water or even join you in the shower.

During the night, when your conure goes to sleep, it can be helpful to cover the cage with a blanket to block light. Like other parrots, the cherry-headed conure is a true beauty sleeper, requiring as much as 10 to 12 hours of sleep per night in order to prevent a cranky bird in the morning.

The cherry-headed conure is known for being an intelligent parrot species that can easily be taught tricks. They are playful birds and, if well-socialized, they tend to be highly affectionate towards their owner. This conure will do anything to be the center of attention.

Remember that parrots are extremely social beings that require a lot of interaction with their owner or with other birds. If you’re not able to dedicate at least a few hours a day to hanging out with your bird, it’s probably best to keep two.

Loneliness in parrots can lead to stress and unwanted behaviors like feather picking, aggression, excessive vocalization and more! So if you’re looking for a sociable companion to spend lots of time with, this might be a good match.

As mentioned earlier, the cherry-headed conure is known to be one of the more talkative parrot species. Among the conures, which don’t tend to be very talented in this department, it may just be the best talker of them all! Most cherry-heads will pick up words, short phrases and tunes if you repeat them often enough.

Unfortunately, it’s also important to keep in mind that this is not a quiet species in the least. Like quite a few other conures, it’s not really suitable for folks who live in apartments with neighbors close by, nor for people who can’t stand a lot of noise.

Cherry-headed conures are prone to intense screaming, especially at sunrise and sunset! There is not really a way to make them stop: it’s just in their nature, and it’s part of having a parrot at home.

You can have a listen at Xeno-Canto.

Cherry-headed conures are very active birds that require exercise every day in order to keep their smart brains stimulated and help prevent obesity. As such, you should let yours out of its cage for a few hours on a daily basis.

A safe play area outside the cage is always a great idea. The cage itself should be filled with toys and perches, although you should make sure to also leave some open space in the middle so your conure can stretch its wings.

Rotate toys regularly to keep things exciting. Other ways to provide important enrichment include training sessions, stimulating foraging and just hanging out together.

Wild cherry-heads nest in hollow trees, like those from the genus Ceiba or Cochlospermum. They’ve also been noted to take up residence in termite mounds. Clutches average 2-4 eggs and naturally hatch in the rainy season, which runs from January to March.

In captivity, this parrot is considered relatively easy to breed. Still, breeding birds is something left to the specialists: raising a clutch takes a lot of hard work and dedication.

It’s easiest to get pairs to breed in larger aviaries. You can put up several nest boxes and logs of different shapes and sizes and place them in different parts of the cage; hopefully, one of the options will appeal to them.

The eggs are incubated for about 23 days. Juvenile birds leave the the nest after 50 days on average.

Any more questions about the cherry-headed conure and its care? Or want to share your experiences with this neotropical beauty? Feel free to leave a comment below!