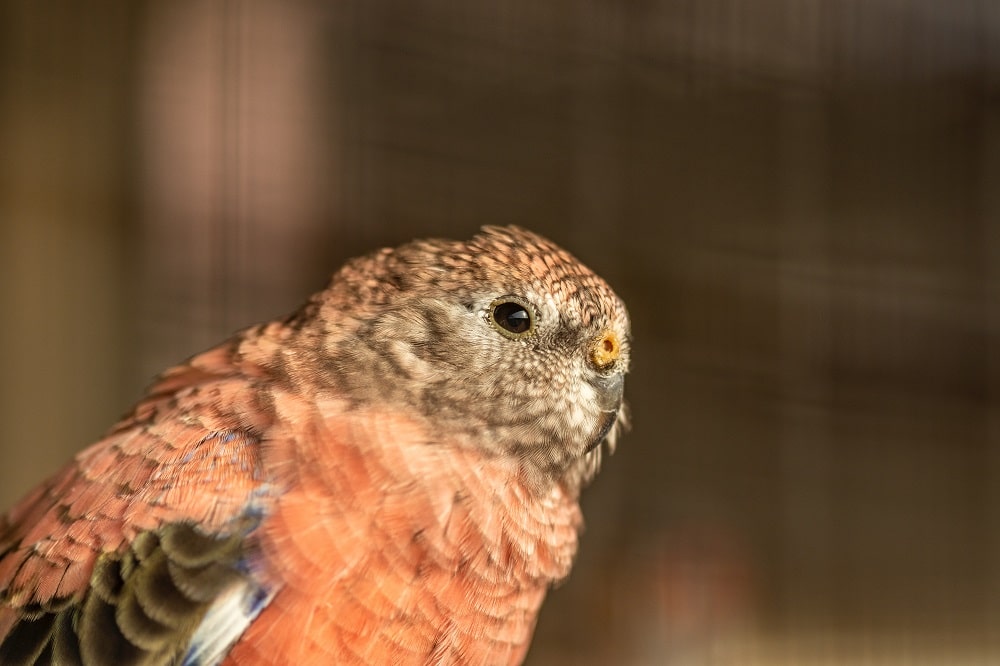 Thinking of adopting a Bourke’s parakeet? Good choice! These small pink parrots are a joy to have in the house with their calm personalities and soft, cheerful chirps. Despite their relatively easy care, though, it’s important to make sure you know how to help your parakeet thrive.

Keep reading for everything you need to know about Bourke’s parakeet care and keeping your bird happy!

The Bourke’s parakeet is not a large parrot: its maximum body length is around 20 cm or 8″ and even the plumpest males usually don’t weigh much more than 50 grams or 1.8 oz.

A wild-color Bourke’s is a smorgasbord of color. Their backs are brownish with hints of green, but their bellies are a bright pink. The head is somewhere in between, while the wings feature a bright blue that’s only visible in flight.

Did you know? Bourke’s parakeets are sexually dimorphic. This means it’s possible to visually distinguish between males and females. The males have brighter colors and sport a band of blue above their eyes.

Sometimes spontaneous color mutations pop up in birds and other animals. With parrots like the Bourke’s parakeet, breeders often make quick use of these by establishing a stable line. Voilà, a brand new color is born!

With this species, a pink color mutation referred to as the rosy Bourke’s parakeet has actually taken over the original in popularity. It’s not difficult to see why: instead of sporting a brownish back for camouflage, the whole bird is bright pink. Only the wing tips retain a little dark coloration. This is also called opaline coloring.

Aside from the rosy Bourke’s parakeet, other popular mutations include:

Taking a peek at the wild habitat and lifestyle of our favorite parrot species can be pretty helpful in figuring out how to care for them in captivity, so let’s start off with that.

Like many domestic parrots, including popular budgies and cockatiels, the Bourke’s parakeet originates from Australia. The species was first discovered in 1835 and later described in 1845.

Bourke’s parakeets were originally placed in a genus called Euphema and, later, long classified as grass parakeets of the genus Neophema. It was later found out that this is likely not what they are, as they can’t interbreed with other Neophema parrots. That’s why they’re now the only member of their own genus, Neopsephotus.

Nowadays, the species is commonly referred to as the Bourke’s parakeet. It’s also sometimes, sundown parrot or pink-bellied parakeet.

Did you know? Bourke’s parakeets were named for Sir Richard Bourke, who was a governor of New South Wales at the time. According to a 1927 article, he supported the expedition that ended up formally describing the species for the first time.

Like the popular budgie, the Bourke’s parakeet is totally adapted to surviving in Australia’s really harsh inland habitats. They’re nomadic, appearing throughout a huge (semi-)arid range while following food and water sources.

In their natural habitat, the Bourke’s parakeet can be found in anything from pairs to huge flocks. It spends a lot of its time foraging on the ground.

One interesting fact about this species is that it’s crepuscular. Unlike the majority of other parrot species, which go to sleep as soon as the sun sets, these are most active during dusk and dawn.

In the wild, Bourke’s parakeets feed on seeds and grasses. They forage on the ground, which is said to be the reason for their lovely color and feather pattern: it helps them blend in.

Common vegetation in the species’ natural habitat is the mulga Acacia as well as spinifex (a type of grass), so it’s likely the seeds of these are included in their diet.

In captivity, most parrot enthusiasts feed their Bourke’s parakeet(s) a seed-based diet. That should be fine for these seed eaters, but it’s important to keep in mind that you can’t just give them a regular dried seed blend and be done with it.

The seeds these birds eat in the wild come from all sorts of different plant species and are eaten in different stages: fresh, dried, sprouted. They’ll also consume any other edible morsels they come across, like fruits or unlucky insects.

To make sure your Bourke’s parakeet stays healthy, you’ll have to find a way to make sure you keep its diet nice and varied. Some ways to do this are:

Tip: You can find more information about figuring out what your parrot should be eating in the article on parrot diet. Malnutrition is a bit of an epidemic among pet parrots, so make sure to inform yourself!

Their temperament is what most Bourke’s parakeet owners appreciate their birds so much for. These guys are a lovely calm species. They’re peaceful and maybe even a bit timid, perfect for apartments because they don’t tend to vocalize much.

You’ll see your Bourke’s parakeet just lounging around for much of the day, but that changes once the sun starts to set. Because they’re crepuscular, they’ll get a sudden burst of energy, which is pretty fun to watch.

If you keep your Bourke’s parakeet inside your home instead of in an aviary, you should be in for some pretty good company. This species is social and tame Bourke’s parakeets will usually love to hang out.

Did you know? Like many other parrots, the Bourke’s parakeet has been selectively bred for color mutations. The wild form has a pink belly and dark back, but there are also ones with almost full pink coloration (rosy Bourkes), yellows, lutinos, blues and more.

It seems the Bourke’s parakeet is seen mostly as an aviary bird, but that doesn’t mean you can’t have yours in a normal parrot cage in your house. If you want to do so, make sure to get a nice big flight cage, preferably a long one. They do love to fly around during their periods of activity.

In large aviaries, there are plenty of other bird species that you can house a Bourke’s parakeet with. They’re peaceful enough to leave pretty much everyone alone: society finches, grass parakeets, cockatiels, doves and more.

If you keep your Bourke’s parakeet inside in a cage rather than a full aviary, it’s best not to take risks. The best company is another Bourke, especially if you don’t always have hours to spend with your bird every day.

The fact that Bourke’s parakeets love napping and lounging doesn’t mean you shouldn’t be providing yours with plenty of enrichment. Just like with other parrots, it’s important to keep their smart brains busy!

Here are some things you can do:

As mentioned earlier, Bourke’s parakeets are among the quieter parrots out there. No parrot will be silent, but the calls of a Bourke are unlikely to disturb neighbors.

The species becomes more vocal during their active hours of the day: dawn and dusk. Nothing to be too concerned about, though. Their chattering really is quite pleasant!

I have seen one or two videos of Bourke’s parakeets vaguely imitating human noises like speech and whistles.

That being said, this is not exactly the go-to species when it comes to talking.

The Bourke’s parakeet is not a particularly vulnerable species. Like other parrots they tend to have an impressive lifespan and can live for over 20 years!

Keep an eye out for the usual suspects like psittacosis (which can spread to humans), respiratory infections and parasites (especially in outdoor aviaries).

You should always take new parrots to the vet for a check-up. It’s also important to know your bird’s normal appearance and behavior so you can recognize if something is wrong. Symptoms of disease include puffed feathers, loss of appetite, wheezing and more.

If you have any more questions about Bourke’s parakeet care or if you want to share your own experiences with these delightful Australian parrots, don’t hesitate to leave a comment below. ?