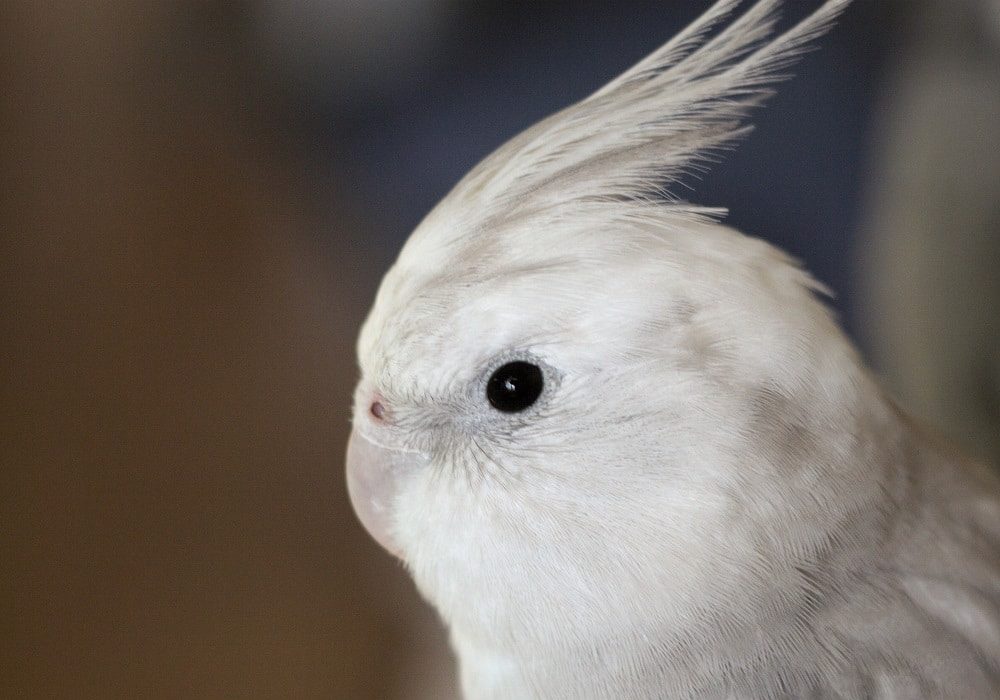 Thinking of getting a cockatiel (Nymphicus hollandicus) or already have one whose sex you’re not sure about? These birds can be sexually dimorphic, meaning that sexing a cockatiel is often possible just by looking at it. But what should you be looking for?

Keep reading for everything you need to know about sexing a cockatiel and figuring out whether your bird is a boy or a girl.

Cockatiels are naturally pretty easy to sex. Grey wild-type cockatiels are pretty sexually dimorphic, with the males sporting a yellow face while the females are a muted grey almost all over. The males also lack spots and barring on the undersides of their wings and tail feathers, which the females do have.

The problem? Selective breeding has produced many cockatiel colors and mutations that are pretty far removed from the wild type. Gone are the days of grey only! Good news for folks who love variety and unique-looking birds, but it does present an issue in terms of sexing a cockatiel. The normal visual indicators are less clear or disappear entirely in some of these selectively bred colors.

Let’s have a look at some of the more common cockatiel colors and mutations as well as whether sexing them is possible just by looking at them (and if so, how!).

This all sounds pretty straightforward, doesn’t it? Unfortunately, there are two caveats.

The first one is that your bird has to be an adult in order to accurately sex it in almost all cases. This is because juvenile cockatiels resemble adult females, with even the males lacking their typical light facial colors. The males will also show spots and barring on the wings and tail. It isn’t until after their first molt or two, between 9-12 months, that their male-specific colors really start to show clearly.

Secondly: some cockatiels just don’t follow the rules. If you want to be 100% sure, your best bet is to either do a DNA test (which we’ll discuss further down) or hope an egg appears to clear your doubts.

Did you know? It’s often claimed that one can sex a cockatiel by the brightness of their cheek patches. Although this is true in wild types – males usually sport much brighter patches – the other mutations make this method much too vague.

Going by the colors, as described above, can be a reasonably accurate method of sexing a cockatiel, as long as the bird is an adult and you remember that pieds are out of the game. Going by behavior is a lot less accurate, as some males can absolutely behave like females and vice versa!

This being said, there are some general differences between male and female cockatiels in terms of behavior. It’s handy to see it as a spectrum: some ‘tiels behave like the stereotype for their gender, while others are a lot more neutral or lean more towards the other gender.

In any case, this can be a good way to confirm things if you already have a hunch.

Indicators of a male

If we view sex-dependent behavior in cockatiels as a spectrum, we can expect males who lean more towards typical manly behavior to be real flirts. They do the work in wooing the girls, so they need to be flamboyant.

A few typical male behaviors include:

By the way: Baby cockatiels won’t show much typical gendered behavior. They’re too busy being babies! You’ll have to wait 6-12 months for the first clear signs.

Indicators of a female

Did you know? Because both parents are involved in raising the chicks, nesting behavior in cockatiels doesn’t really say much about their gender. The males can get just as territorial over their imaginary nest as the females.

It used to be pretty much impossible for the casual parrot owner to have their bird sexed using a DNA test. It was very expensive and something really only reserved for breeders and professionals. Gone are those days! DNA sexing for parrots is very affordable and easy now.

In most cases, you’ll buy a parrot DNA test online or at your local pet store. The test usually requires you to pluck one or multiple feathers from your bird and send them to the address listed on the test. Fresh eggshell or toenails may also work; the instructions will specify this.

Once your test company of choice has received the material you submitted, the DNA sexing is performed in a lab using a PCR test. The accuracy of these tests is apparently 99.9% and results are simply emailed to you. Perfect for those pesky pieds and albinos, as well as cases where you’re just not sure based on color and behavior.

The most common parrot DNA test is by Pollygene.

Did you know? A method sometimes used for sexing a cockatiel is feeling the pelvic bones. They will be wider apart in females. That being said, this doesn’t work when a bird is younger and it’s also pretty difficult to tell when you’re not an expert. If you know what you’re doing, you could use this to help confirm a hunch, though!

If you take a quick look at cockatiel forums and Facebook groups, you’ll undoubtedly see plenty of folks trying to figure out their bird’s sex. Why? Does it actually matter? Well, part of it is probably just humans wanting to assign an accurately gendered name to their pets.

This being said, yes, sex does matter to a degree. This especially applies to female birds. Even if your female cockatiel doesn’t have a mate, she still has the capacity to lay eggs, a process that’s pretty heavy on the body. It’s something the casual bird owner is best off trying to avoid.

The above means that if you know you own a female cockatiel, it allows you to be more vigilant. If you see nesting behavior, you can act quickly to discourage it. If she appears hormonal, you might be able to halt the egg production by taking measures. Additionally, if you notice your cockatiel appears not to be feeling well, it’s helpful to be able to check the bird for female-specific issues like egg-binding.

If you have any more questions about sexing a cockatiel or if you’d like to share your own experiences with these gorgeous Australian parrots, don’t hesitate to leave a comment below!

PS: If you guessed male on the last image, you were correct.

Want to read more about cockatiels and how to keep yours happy and healthy? Don’t forget to have a look at the full cockatiel care guide.

12 thoughts on “Sexing A Cockatiel | Is My Cockatiel Male Or Female?”