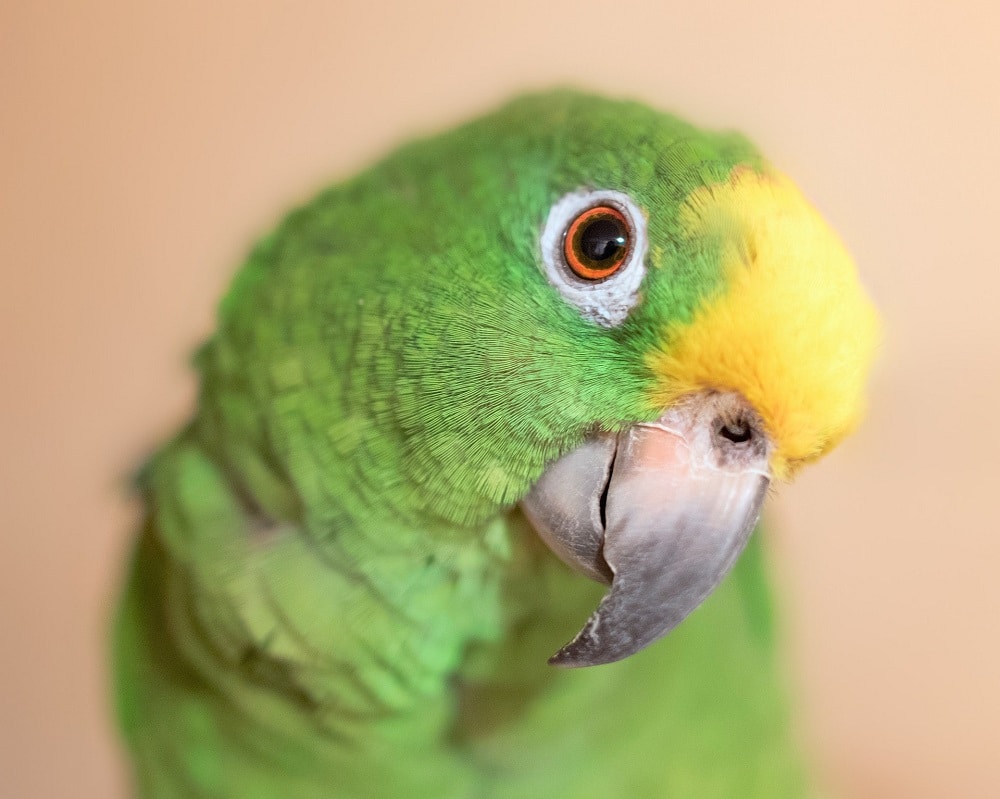 Their talking ability is a big part of the attractiveness of many parrot species. It’s just hilarious and cute when a parrot imitates your voice, learns to say silly phrases and whistle well-known songs. But what’s actually behind the concept of talking parrots? How do parrots talk and why?

Find out all about talking parrots and the mechanisms behind this amazing vocal mimicry.

Why do parrots talk?

It’s not common for birds to learn to imitate sounds, especially more complex ones. Songbirds can do it, with corvids and starlings being particularly good at it. Another interesting group that can learn to copy sounds are hummingbirds (Chakraborty et al., 2015). And then of course, the other large class of birds that are adept at this vocal mimicry are parrots.

So we know that they can learn to speak, and often actually quite well too. But why do parrots talk? There are two main reasons.

In the wild, it’s immensely important for a parrot to be part of a group (also known as a flock). Flocking offers plenty of advantages: safety in numbers, searching for foraging spots together and even helping to raise each others chicks in some cases. Because of this, parrots have evolved to become extremely social and they absolutely crave company.

In nature, different parrot flocks actually develop different “accents” that they can use to distinguish which birds are part of their family. In captivity, humans are seen part of the flock. As such, the parrot might learn to imitate human speech in order to fit in.

In cases of parrots that have been trained specifically to talk and received praise for it in the past, it’s not difficult to see why they are motivated to speak. They love positive reinforcement in the form of attention or a treat. As such, they might have started off by copying human speech and sounds in order to fit into the flock, but quickly learned that the behavior had another advantage: praise.

Even if you don’t offer treats as a reward for speaking, your own enthusiasm is often enough to make your parrot happy. They respond very strongly to commotion, like when you raise your voice and start speaking excitedly when the bird has done something you like.

Did you know? Despite their small size, budgies are very adept at imitating human speech. According to the Guinness Book of World Records, the bird with the largest vocabulary was named Puck. Puck passed away in 1994 and learned an estimated 1728 words during his lifetime.

“Largest vocabulary for a bird ever“

How do parrots talk?

Now that we know why they are motivated to talk, another question pops up: how do parrots talk?

How come they have the ability to copy human sounds and so many other birds don’t?

Do parrots understand what they’re saying?

Before we get into this, it’s important to understand that a lot of the time, parrots don’t actually understand what they’re saying. They don’t use speech in order to express themselves but, as discussed earlier, to fit in and receive praise.

A lot of the time, though, it seems almost like our parrots do actually understand what they’re saying. This is because they apply speech in such an appropriate manner. They’re just very good at learning context; whether it can ever go further than that is a hotly debated subject.

This all being said, appears it’s not impossible for a parrot to learn abstract concepts that suggest it understands meaning. With training, for example, some can actually tell foods apart. If you point at an apple and your parrot says “apple”, but it doesn’t say it when you point at a pear, that suggests it actually knows what the word apple refers to this specific fruit.

Did you know? Probably the most famous talking parrot was Alex the African grey. His owner, Irene Pepperberg, proved that parrots are able to learn to understand abstract concepts like the meaning of words, numbers (including zero), location and size. It was previously thought this ability was limited to larger animals like great apes and dolphins.

A Thinking Bird or Just Another Birdbrain?

The fact that parrots and songbirds can learn to imitate sounds, while other birds can’t, has actually been traced all the way back to the brain. According to Chakraborty et al. (2015), all of these vocal learners have a special “song system” in their brains. As in, part of their brain is specifically dedicated to learning sounds and repeating them.

Parrots have “a song system within a song system”, making theirs unique. This might be the explanation for why there are differences in the way they vocalize and how well they learn to do it compared to other species.

Parrots don’t have lips, teeth or a palate. In fact, they don’t even have vocal cords. How do parrots talk almost like humans do without possessing the tools that we use to form our words? They adapt very well.

Rather than using vocal cords located in the larynx to speak, like humans do, birds have a separate organ called the syrinx. This syrinx is located right where the windpipe (trachea) meets the lungs and it has vocal folds just like our larynxes do.

The reason parrots can imitate sounds that we need our lips or teeth to form is that their syrinx is much more flexible than our larynx. The two sides of the syrinx can actually be vibrated separately (Nottebohm, 1976), allowing them to accurately copy pitch, volume and word formation down to a point where they can even reproduce different human accents.

It’s also been suggested that the parrot’s tongue plays a role in vocalization (Beckers, Nelson & Suthers, 2004). The authors discovered this by – gulp! – taking a bunch of quaker parrots and replacing their syrinx with a speaker that emitted a tone. They found that the parrots’ tongue movements did cause changes in the sound.

The difference between parrot species in how good they are at vocalizations might have something to do with the difference in their syrinxes. For example, Warren, Patterson & Pepperberg (1996) suggested that African gray parrot syringeal cartilage is positioned differently than that of other parrots, possibly giving it increased control of the syrinx opening. The above might contribute to African grays’ amazing ability to imitate human speech.

Parrots that can talk

The birds below are some examples of parrots that have mastered the art of speaking!

If you’d like to read more on which species of parrots are the best talkers, have a look at the article on what parrots talk.

If you have any questions about how parrots talk and why or if you want to share your own experiences with talking parrots, don’t hesitate to leave a comment below.

4 thoughts on “How do parrots talk? And why?”