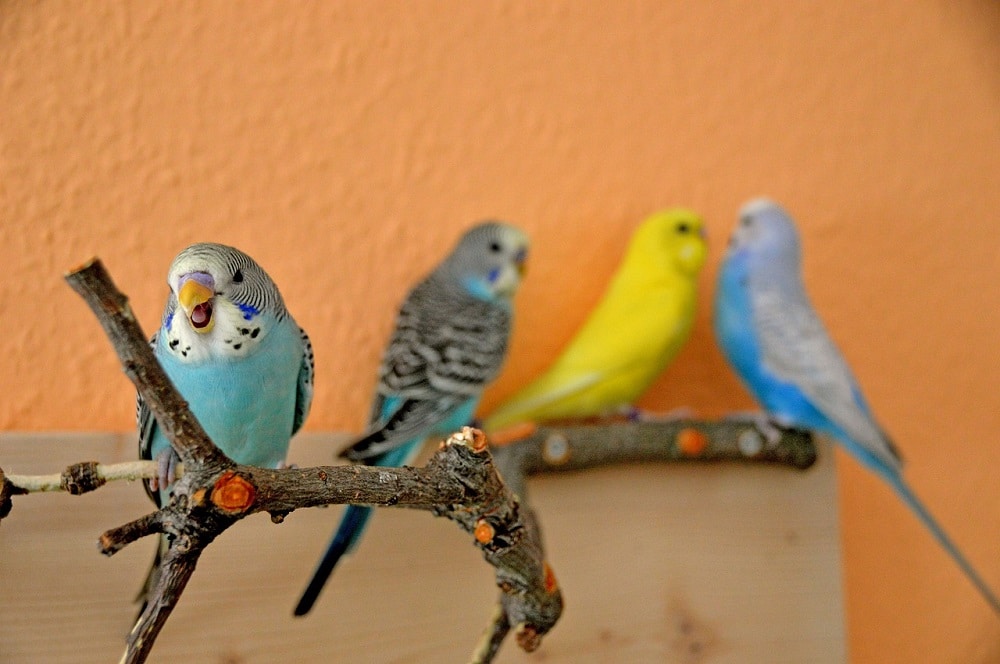 If you’re considering adding one or multiple budgies to your family, you might be wondering about their noise levels. Are budgies loud? It’s very important to make sure you can handle a pet’s sounds before adopting, to avoid stress and rehoming at a later stage.

Let’s go into budgie noise levels and what you can expect from one or more parakeets.

No! For a parrot, they are not loud. In fact, they’re considered one of the quietest pet birds.

For a pet in general, however, they can be considered pretty noisy. Even a single budgie will vocalize regularly, and since I don’t recommend keeping just one, you can expect a pretty constant stream of chatter and other noise.

Sound is the primary way for budgies to keep in touch. To keep track of their flock even from a few trees over, they use loud flock calls. To woo females, the males employ an array of different songs. And if they don’t agree with something, you can definitely expect some pretty assertive screams! Vocalizations are extremely important to these birds. They can remember and even learn new ones easily (Dooling, 1986).

All in all, budgie noise levels will be acceptable for most people, and they are suitable for apartment living unless your neighbors are extremely sensitive. That being said, don’t expect to be able to enjoy pure silence during the day too frequently.

Budgies can produce an array of sounds with varying degrees of loudness. They even have the ability to learn to imitate sounds, so you never really know what to expect!

A few of the basic budgie sounds you’ll definitely hear are:

If you’ve had your budgie(s) for a while, you’ll start to recognize their different sounds. Many of these can be combined and have different versions!

As with some other parrot species, like cockatiels, there are some notable differences between males and females in terms of noise. In the budgie world, it’s the males that need to make the effort to conquer the females. This is done with a combination of head bobbing, dances and songs.

Due to this, it’s the male budgies that are more musically inclined. They tend to produce a more constant stream of chatter. Males also tend to be more talented when it comes to picking up sounds and learn to talk, although there are some exceptions.

Does this mean female budgies are quiet? No, as they’ll still attempt to connect with their flock using flock calls and produce other sounds. They just won’t sing/chatter/warble as much. This does mean that overall there is a good chance they won’t produce as much noise, but you shouldn’t expect your female budgie to be silent.

Are budgies loud at night?

This is a question I get a lot. Rest assured: budgies are not loud at night. In fact, they stop making noise as soon as it gets dark (ie. no daylight and the lights are off). You might hear the occasional sleepy peep, but generally no more.

Do keep in mind that it is possible you’ll be woken up by your budgies a few times a year. A loud noise outside or movement in the house (like a shadow on the wall) can really spook them, causing a night fright. This may involve lots of consternation, alarm calls and thrashing around. If you hear something like this, you should head to the cage and turn on the lights immediately, as budgies can hurt themselves during night frights.

If the above is a frequent occurrence, it can help to leave a night light on for your bird(s).

When are budgies loud?

Like many other bird species, budgies are loudest during dawn and dusk. If you’re someone who likes to sleep in, make sure you can’t hear your birds too well from the bedroom or consider investing in a pair of earbuds! They can definitely cause some ruckus in the early hours of the morning, although I’ve found that serving their breakfast usually quiets them down.

Other than in the morning and evening, budgies do tend to make some noise throughout the day. This especially applies to males and of course, the sound multiplies with the size of the flock. A pair of budgies is already a rather constant source of chatter, but a flock of five or more can truly be pretty loud.

You can also expect your budgies to be extra loud if you have people over, as they like the sound of you talking to your visitors and enjoy joining in. Parrots just love noise. Your budgies may also start calling out if:

Help, my budgie is loud!

If you feel like your budgie is vocalizing excessively, you’ll have to consider the above. As mentioned, a flock can make quite a bit of noise, but certain sounds can be indicative of a problem.

One common issue is for a budgie to start flock calling every time you leave the room. Not surprising: these are extremely social animals that rely on their flock (which includes you) for safety. If you keep a solo budgie and it flock calls excessively, you really might want to consider getting your bird a friend.

If your budgie is being overly loud, you should also scrutinize its cage or environment.

Don’t forget to review your budgies’ sleep schedule as well. Birds need 12-14 hours of sleep a day and they can get a bit loud if they’re sleep deprived.

Oh yes! In fact, they are among the parrots with the largest potential vocabularies. Budgies are small and their voices can be strangely robotic, but the males especially can actually be very talented talkers.

Want to know more about budgie talking, why they do it and how you can encourage it in your bird? Have a look at the article on parakeet talking. Just one thing: if you teach your budgie a phrase, make sure you’re prepared to hear it a LOT!

So, are budgies loud? In the end, it’s really all a matter of perception. In terms of parrots, they’re among the quietest out there. Compared to a goldfish, though? Well, pretty loud. If you’re unsure, your best bet is to watch plenty of videos on YouTube or even visit the local pet store a few times to have a good listen.

If you have any more questions about budgie noise levels or want to share your own experiences with these delightful small parakeets, don’t hesitate to leave a comment below!

6 thoughts on “Are Budgies Loud? | About Budgie Noise Levels & Sounds”