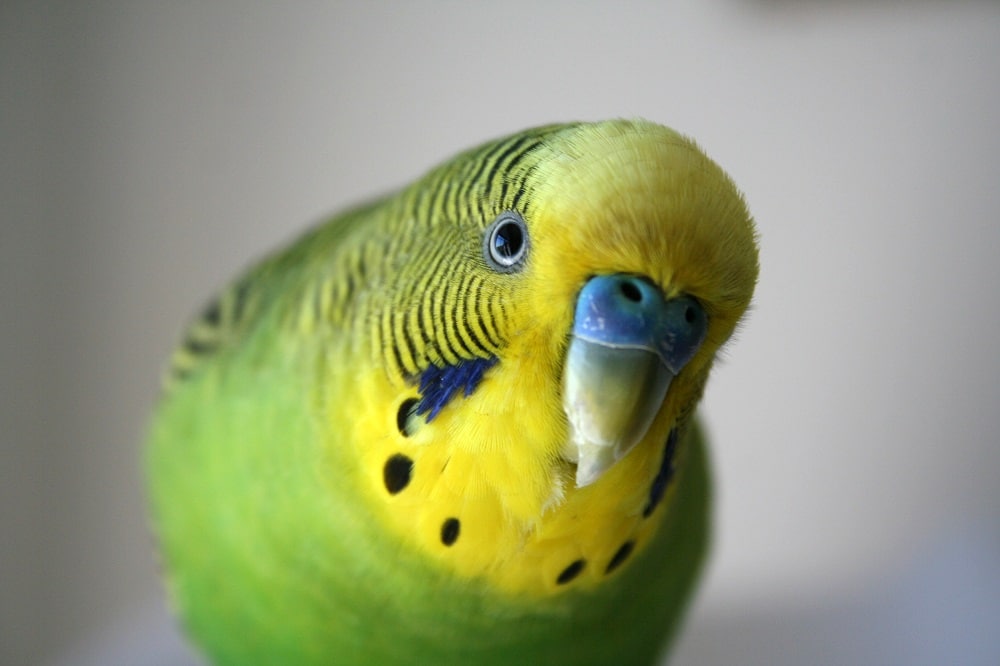 If you’re thinking of adding a parakeet to your family, you might be wondering how long your feathered friend will be around for. What is the lifespan of a parakeet?

Let’s go into the lifespans of different parakeet species and what you can do to make sure yours reaches a respectable age.

How long does a budgie live?

“Parakeet” is a term used for a wide range of parrots with certain characteristics, like long tail feathers and a diet heavy in seeds. The most common one is the budgerigar (Melopsittacus undulatus), which is the most popular pet parrot species out there.

Budgies are small parakeets that originate from Australia. Despite their size, these guys actually have the potential to reach pretty surprising ages!

Most budgies pass away prematurely because they are still commonly seen as disposable pets. They’re cheap to buy and myths about their care are still rampant, causing many budgies to spend their lives locked in small cages eating a low-quality seed-based diet.

Due to the above, most budgies pass away before the age of 5. A real shame, because they actually have the potential to live for up to 20 years with good care and a healthy dose of luck. Budgies with a verified age of nearly 30 have actually been recorded!

If you’d like to know more about budgie lifespan, head over to the full article: How long does a budgie live?

What is the lifespan of a parakeet?

As mentioned about, budgies are the most popular type of pet parakeet. However, there are a whole bunch more parakeet species out there of all shapes and sizes! According to Wikipedia, in fact, there are about 115 species of parakeets.

As with all parrots, the lifespan of a parakeet is pretty impressive. It is of course true that many factors are involved, including luck and genetics. However, with good care and a healthy diet you can expect your parakeet to be around for at least a decade and usually even more.

The table below outlines potential lifespans for some of the more common pet parakeets. Note that some of the species aren’t usually referred to as parakeets, but they’re still classified as such.

Click the linked species for a full guide to their lifespans!

As you can see in the table above, all pet parakeets have an impressive lifespan. Therefore, before you take the plunge and decide to add one to your family, it’s extremely important to have a long hard think about where you see your own life going. For example, will you still be willing and able to care for your parakeet in 10 years? And how about 15, or 20?

What influences the lifespan of a parakeet?

Now that we’ve established the lifespan of some common parakeets, let’s have a look at how to make sure yours actually has a good chance of reaching the upper ends of those numbers. As with many other pets, there are still many persistent myths out there about parakeet care.

The below outlines a number of the commonly made mistakes, many of which can unfortunately take years off your parakeet’s life.

How old is my parakeet?

In order to figure out how much longer your parakeet will be around, and whether it needs special care, it’s handy to know how old the bird is. If you got it directly from a breeder you’re usually in luck: they should know when a clutch hatched and your parakeet might even have a ring that states its hatch date!

But what if you got your parakeet from a pet store or as a rescue? Is there any way to figure out its age? For most species, unfortunately not. Very young birds are quite recognizable, as they’re still clumsy and their feathers might not have grown in yet. The budgie pictured above, for example, is clearly still a baby.

Other than that, only a few species show indicators of their age:

Some parrot enthusiasts claim they can tell a bird’s age from its feet and beak, which start looking more worn with age. Although this can likely tell you whether a parakeet is a juvenile or not, there is really not much of a visual difference between a 5-year-old one and a 35-year-old one!

Here is one thing that might help: If you have a budgie that you got from a pet store, it’s generally safe to assume it was less than a year old when you got it.

If you have any more questions about the lifespan of a parakeet or want to share your own experiences, don’t hesitate to leave a comment below!

1 thought on “How long does a parakeet live?”