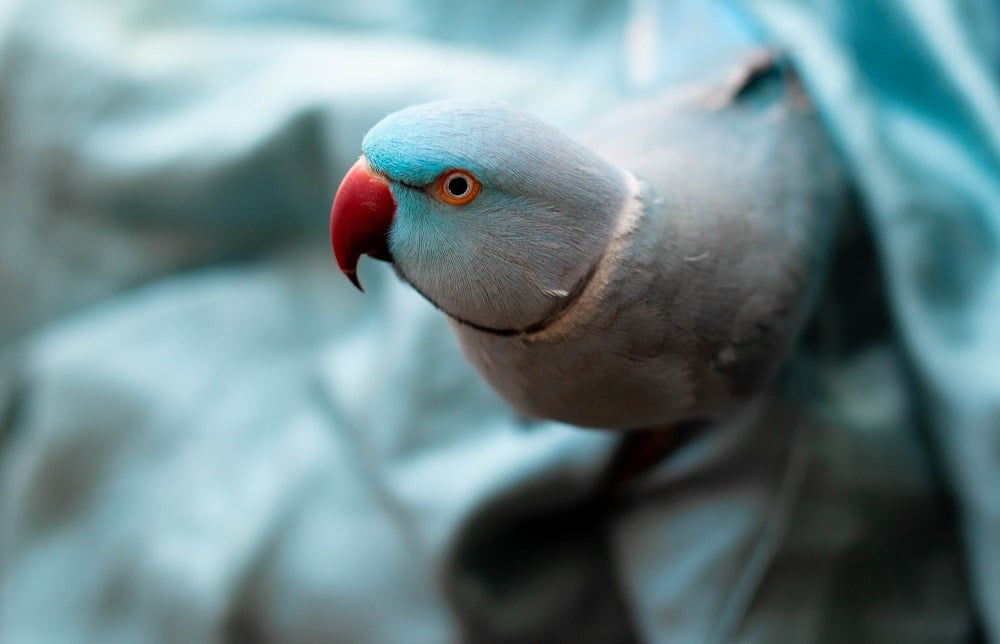 Are you thinking of adding an Indian ringneck parrot (also known as rose-ringed parakeet) to your family? Not surprising, as these talkative birds can make great pets for the right owner. But what will your new feathered friend need to thrive in your home?

Keep reading for everything you need to know about Indian ringneck parrot care and keeping these colorful parrots happy and healthy!

Rose-ringed parakeets are naturally green in color, with a bright red beak. They’re typically parakeet-shaped, with their tails sometimes reaching almost the same length as their slender bodies. Their total length of around 40 cm/16″ and weight of around 130 grams make them medium-sized parrots.

The common name “ringneck” was derived from the fact that the males of the species do indeed sport a black to pink ring around their neck, which extends to the cheeks and stops at the beak. Females lack this ring, or have a faint line of lighter feathers around their neck at the maximum

Did you know? A 2019 DNA study led the authors to suggest that the taxonomy of the genus Psittacula, of which the Indian ringneck forms part, should be changed. According to their research, Psittacula krameri should receive the new scientific name of Alexandrinus krameri, along with some other pretty major revisions. However, I’ll keep using Psittacula here for now, as not many sources have caught on yet.

This long history in aviculture has given breeders plenty of time to develop a wide range of rose-ringed parakeet colors through selective breeding.

You’ll now find these parrots in a veritable rainbow of different shades, including natural green, yellow, different shades of blue and violet-ish, white and combinations where the head is a different color than the body.

Did you know? There is another species in the genus Psittacula that can look confusingly similar to the Indian ringneck to the untrained eye: the Alexandrine parakeet, Psittacula eupatria. Look for a slightly heftier bird with a bigger beak and red shoulder patches.

The four subspecies of Psittacula krameri together cover quite a wide natural range. The African subspecies are found in a belt that ranges across Central Africa, from Senegal on the western end to Ethiopia on the eastern side. They reach into Egypt in the north and Uganda in the south.

The Indian subspecies is obviously mostly associated with the country of India, but it actually extends from Afghanistan in the west to as far east as Vietnam.

This parrot is not very picky when it comes to its habitat, which is probably why it’s so widespread today. It’s listed as Least Concern by the IUCN, which notes that it naturally inhabits desert-ish grasslands and savannahs, as well as more shrubby and even forested areas and wetlands. Their favorite environment, though? Cities and farmland, where food is very easy to find.

The perfect storm of the Indian ringneck parrot’s hardiness, adaptability, love for human food and the pet trade have made this species incredibly invasive. Feral populations can be found around the world, causing trouble for native species in many areas.

I’ve seen wild ringnecks in all the countries I’ve lived in (The Netherlands, England and Spain, the latter of which has banned the species as a pet to try and prevent further spread), even though they’re not native to any of them. London in particular has huge populations.

Did you know? As described in the article on ringneck parrot history, this bird has been a favorite pet among humans since the times of the Ancient Romans and Greeks.

In the wild, this herbivorous species mostly consumes different types of seeds, making it a granivore. Indian ringneck parrots will also eat berries and fruits, nuts, flower buds and even the occasional insect.

Ringnecks are also considered an agricultural pest in some areas, as flocks raid cereal grain and legume crops, orchards and more. I noticed in London that they’re also not opposed to visiting bird feeders!

What should you feed your pet Indian ringneck parakeet? It’s important to keep their natural diet in mind, but I want to stress that you shouldn’t let this trick you into thinking they need to be fed a seed diet. Unfortunately, we don’t have access to the same variety of seeds these birds eat in the wild, and dried parrot seed mixes can lead to malnutrition if you feed them exclusively.

The article on parrot diet contains pretty much everything you need to know, but here’s a short summary. Try combining the following for a healthy Indian ringneck parrot:

Did you know? I found a charming scientific study concluding that rose-ringed parakeets actually have a foot preference for holding their food. There were more left-footed birds than right-footed ones! Which foot does your parrot prefer?

As with any parrot, when it comes to choosing a cage for your Indian ringneck, it’s important to go as large as possible. These are medium-sized birds with long tails that need quite a bit of space to stretch their wings. The exception would be if you leave the cage door open all day so your parrot can roam free, in which case you can stick to the minimum cage size of around 2 x 2 x 3 ft (60 x 90 cm).

Provide various perches made of natural wood, especially near the top of the cage. Make sure your Indian ringneck has access to multiple food and water stations. And don’t forget the toys: we’ll discuss those below in the section on enrichment!

Did you know? As described in the article about Indian ringneck parrot lifespan, these birds can live for up to 30 years with the right care. Getting one is a big commitment!

Oh boy, where do I start?! Indian ringneck parrots are not meant for those who live a busy life but still expect a cuddly bird. They’re extremely intelligent and demanding, get bored easily and are known for getting nippy and destructive if left to their own devices.

If you have the patience and time to hang out and play with, as well as train your Indian ringneck, then you’ve got a fantastic bird on your hands. They can be extremely loving and loyal with a great love for neck scratches. They’re not shy at all, with the males especially being known for their fancy, seemingly arrogant strut.

A well-socialized ringneck will enjoy forming part of your family, hanging out and inspecting everything that goes on in the house. Everyone should handle and feed the bird on a regular basis, because they do have a tendency to bond with one person and become aggressive towards others.

As you’ve probably included from the section on temperament above, it’s extremely important to keep an Indian ringneck parrot’s smart brain busy. A bored bird is a recipe for disaster!

So what kind of enrichment should you consider? Here are just a few examples:

Well… they’re not quiet, that’s for sure. Loudness is a relative concept for parrots, as all species produce a lot of noise, but Indian ringnecks tend to fall somewhere in the middle. Their flock call can be very piercing and the boys especially love to spend much of the day chattering and talking.

If you’re sensitive to noise, these birds are not for you. You can choose one of the quieter pet birds out there or, if you’re very intolerant, will have to consider a different type of pet.

Yes! The males (and sometimes females) of this species are pretty talented talkers. If you train your Indian ringneck parrot well, it can end up acquiring an impressive vocabulary of phrases, whistles and sounds.

The unfortunate reality with parrots like this one is that because they’re so curious, they’re also pretty prone to getting themselves in trouble. This is why it’s extremely important to have the number for an avian vet on hand.

All rooms your Indian ringneck has access to should be parrot-proofed: no open windows, everyone is aware of where the bird is at all times, no toxic foods or plants, no perfume, cigarette smoke or other fragrances. You should avoid using anti-stick pans and really just keep your parrot out of the kitchen in general. Parrots should also not be able to interact with other pets like cats and dogs.

Visit your vet on at least a yearly basis for a check-up, starting when you bring your Indian ringneck parrot home.

If you have any more questions about Indian ringneck parrot care or want to share your own experiences with these talkative parrots, don’t hesitate to leave a comment below!