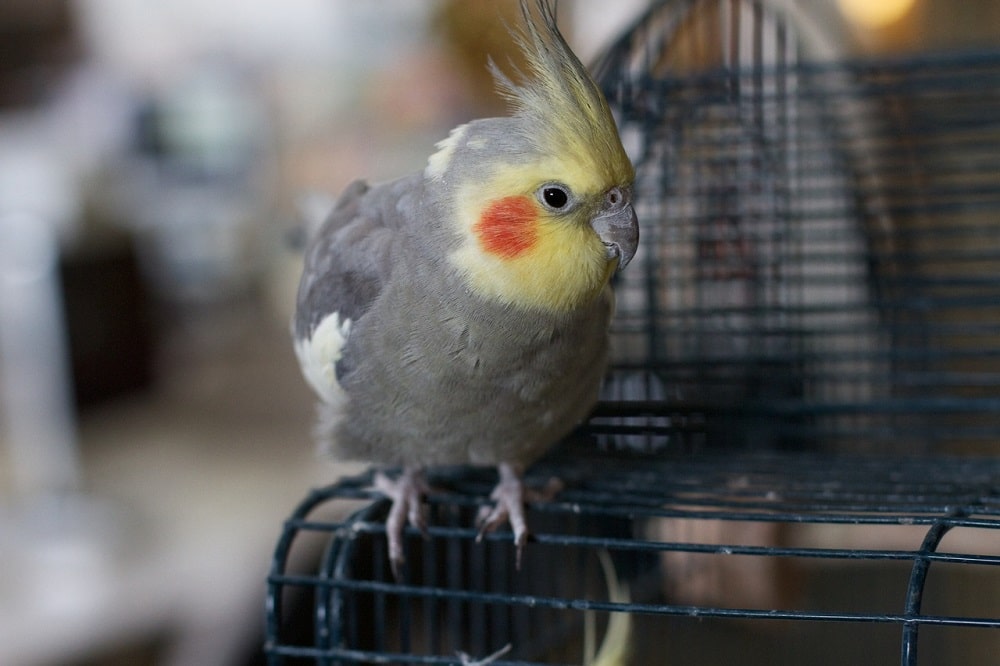 The comparison of cockatiel vs. cockatoo can be confusing for those new to these parrots. After all, they look similar (with a feather crest, hooked beak and big black eyes) and they naturally occur in overlapping habitats in Australia. On the other hand, there are also prominent differences: cockatiels are much smaller, have longer tail feathers and sport different colors.

So are cockatiels cockatoos or not? Learn all about the differences between cockatiel vs cockatoo and which would make a better addition to your family!

Contents hide
1 Are cockatiels members of the cockatoo family?
2 Cockatoo vs cockatiel: what are the differences?
2.1 Size
2.2 Appearance
2.3 Lifespan
2.4 Behavior
3 Cockatiel vs cockatoo: which is best for you?

Are cockatiels members of the cockatoo family?

To really understand cockatiels’ place in the animal kingdom, it’s important to remember that animals are divided by classes, orders, families, subfamilies and finally the genus and species. These classifications allow us to see where this species falls on the tree and how close they are to cockatoos.

Cockatiels are members of the class Aves, the birds. Inside the bird class, they’re members of the Psittaciformes, better known as parrots. Their family is Cacatuidae (cockatoos), but within this family they are the sole member of their own subfamily: Nymphicinae. Their genus is Nymphicus. They are the only species in the genus: Nymphicus hollandicus.

The classification of cockatiels did not come about easily. They have been placed in a bunch of different (sub-)families, including the black cockatoos, before finally landing in their solo spot in Nympicinae.

So what does all the family and subfamily stuff mean? Basically, cockatiels are indeed also cockatoos. And that’s not surprising, since they tick all the boxes that separate cockatoos from other parrots: they have the typical crest, dusty down feathers, no genetic possibility of blue or green coloration and feathers covering the sides of the beak (Brown & Toft, 1999).

However, despite all their similarities, it has been established through molecular research that within the cockatoo family, the cockatiels make up a category of their own. Most other cockatoos are members of the subfamily Cacatuinae (the exception are Calyptorhynchinae, the black cockatoos). This places them on a different “branch of the tree” than cockatiels.

What the above means, for example, is that a Moluccan cockatoo is more closely related to most other cockatoos, like galahs or corellas, than to cockatiels. However, that doesn’t mean that cockatiels aren’t real cockatoos: they’re just a different type of cockatoo that forms a whole different branch on the cockatoo tree, even though they descended from the same common ancestor.

An additional ‘confirmation’ that cockatiels are indeed closely related to other cockatoos came when an Australian parrot enthusiast discovered a cross between a galah cockatoo and a cockatiel in her aviary.

Cockatoo vs cockatiel: what are the differences?

There are pretty much as many differences between cockatiel vs cockatoo as there are similarities. Let’s briefly go into the most significant ones!

Cockatiels are the smallest members of the family Cacatuidae at a maximum size of about 12″ (30 cm) from head to tail and a weight of only 3.2 ounces (90 grams).

Compare that to the largest cockatoo: the black palm cockatoo (or goliath cockatoo, Probosciger aterrimus) can reach a length of 24″ (61 cm) and a weigh up to a kilo (that’s 2.2 lbs!).

There are plenty of differences in appearances between cockatiels vs cockatoo. Some of the most notable distinctions are:

Unfortunately for cockatiel enthusiasts, these small cockatoos don’t live nearly as long as some of their larger cousins do. Cockatiel lifespan is about 20-25 years in lucky cases, with the oldest ‘tiel in the Guiness Book of World Records noted to have been 32 years old.

Some species of cockatoos, on the other hand, can reach almost human ages. The oldest one listed by the Guinness Book was Cookie the Major Mitchell’s cockatoo, who passed away at 82 in 2016. Other notable mentions include a sulphur-crested cockatoo who apparently passed away at 120 years old in 1916 and Fred, who blew out 100 candles (or ate 100 millet sprays?) in 2014.

It’s important to note that, of course, not all cockatoos make it to their 100th birthdays. Not by a long shot! However, their lifespans are still much greater than those of the smaller cockatiels.

Probably some of the most notable differences between cockatiels vs cockatoos center around their behavior.

Cockatiel vs cockatoo: which is best for you?

Hands down, without a doubt: most likely a cockatiel. They’re the second most popular pet parrot species for a reason (behind the budgerigar). Although there is no such thing as a “no-care bird”, ‘tiels’ relaxed nature, comparatively low noise levels and small size make them much more manageable than cockatoos.

Cockatiels are cheaper than cockatoos and so are their cages and their diets. They’re also much easier to find in pet stores and there’s plenty of responsible breeders around (and rescues in need of a home, too). But there’s more to it than just price and availability.

If you’re interested in owning a cockatoo, you have to keep in mind that their intelligence levels are comparable to those of a toddler – and so are their noise levels and need for attention. Unless you keep multiple ‘toos (which multiplies the noise and makes them less likely to bond strongly to you), you’re already out if you work 8 hours a day.

You’ll have to dedicate a significant corner of your house to the bird’s cage and even more space to its out-of-cage play areas. Be prepared to spend hours preparing foods, puzzles and toys (which will unceremoniously be ripped apart). Think you can have a quiet Sunday afternoon watching TV or staying in bed? Think again! Either your bird will get restless in its cage or it’ll probably end up in your face trying to get your attention.

All this sounds pretty negative but it doesn’t mean I wouldn’t recommend a cockatoo to anyone: a ‘too can be your friend for (almost!) life. It just means I wouldn’t recommend a cockatoo to anyone who doesn’t want to put in the hard work to achieve that friendship, nor anyone who doesn’t have a stable lifestyle and knows that they can maintain a bird for 50+ years.

If you have any more questions about the difference between cockatiel vs. cockatoo or want to share your experiences with these amazing crested parrot species, don’t hesitate to leave a comment below!

7 thoughts on “Cockatiel vs Cockatoo | What’s The Difference?”