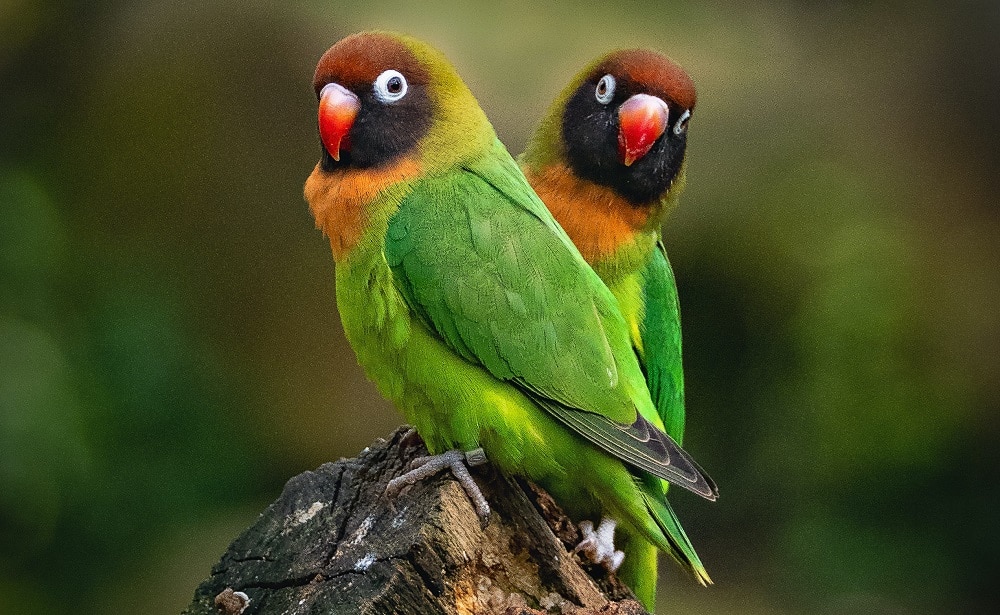 Have you added a lovebird to your family and don’t know its sex? Or do you have a lovebird that came to you as a male or female, but you’re starting to suspect otherwise? You’re not alone! Figuring out whether your lovebird is male or female is much more challenging than in some other parrots.

Keep reading for everything you need to know about how to find out whether your lovebird is male or female. We’ll start off by discussing some less accurate methods first and then I’ll go into the option I personally recommend.

This post contains affiliate links. If you make a purchase, a small percentage will go to Psittacology at no extra cost to you. Thanks for supporting Psittacology!

The lovebird species that are sexually dimorphic are the following three (out of nine existing species), which are uncommon in the pet trade. You’re highly unlikely to come across one.

Despite lovebirds’ lack of sexual dimorphism, according to some lovebird enthusiasts, you can tentatively sex your pet lovebird based on some small visual indicators.

The females are supposed to be smaller (or larger, according to some sources…), but more rounded in the head and shoulders. They are said to have larger rings around the eyes and sport a bigger beak as well.

While this may be true in some specimens, it isn’t a guarantee by any means. I personally wouldn’t even bother with visual sexing, as even long-time breeders get it wrong all the time.

Did you know? In limited cases, with selectively bred mutations, you can identify the sex of lovebird chicks by their father’s coloration. This post explains some of it, but brace yourself, it’s complicated if you’re not familiar with lovebird color genetics.

Another method often used to attempt to sex lovebirds is through a pelvic exam. If you have multiple Agapornis, you can hold each of them gently upside down in your hand and feel the pelvic region with your finger to compare. In females, the pelvic bones should be further apart than in males in order to allow eggs to pass.

This method of sexing may have slightly higher reliability than just going by the birds’ looks, but it’s often not that much better than a blind guess. This especially applies if you don’t have much experience. There are differences between individuals and you can easily misjudge things. You can even hurt your bird if you do it wrong.

Some lovebird enthusiasts swear you can easily sex an Agapornis based on its behavior. In reality, it’s not the most reliable way to go about things by any means. Still, I’ll discuss a few indicators here for those that don’t want or can’t afford a DNA test for their bird (see the next paragraph) right now.

Indicators of a male

Indicators of a female

There are some things that are noted by certain sources to indicate lovebird sex, but don’t actually tell you that much. These include:

For a long time, it wasn’t possible to offer commercial DNA tests for pet birds. The amount of blood needed for these tests was too large and it was just too complicated. That has changed, which is great news for owners of monomorphic parrots like Agapornis.

You can now find at-home DNA testing kits with very high accuracy (usually 99.9% or more) in many online stores and even some pet stores. These only need a freshly plucked feather, a toenail or some fresh eggshell to determine by means of a PCR test whether your lovebird is a boy or a girl. You’ll get the results emailed back to you.

DNA testing is the absolute most accurate method to determine lovebird sex. It’s the only way you can be almost 100% sure. And it’s not expensive either, so get testing! The tests I come across most often are by PollyGene.

Did you know? There is also a method referred to as endoscoping sexing, which involves surgery to look at the parrot’s gonads (testes or ovaries). Obviously this is very invasive and has to be done under anesthesia. That’s why it has largely made way for DNA testing.

To a certain degree, it does. This is mainly because hens are always at risk of egg-binding. Knowing your lovebird is female can help you be vigilant for indications of this potentially fatal problem. Being aware of your bird’s sex can also help you understand hormonal behavior and aid in preventing it.

And by the way: don’t always believe the breeder. I’ve heard of endless instances where a lovebird or other parrot was supposedly of one sex and then turned out to be the other. Imagine the surprise when you always believed your bird was a male and one day it lays an egg! DNA testing is just the most reliable way to figure it out.

If you have any more questions about figuring out whether your lovebird is male or female or if you want to share your own experiences with sexing Agapornis, don’t hesitate to leave a comment below!