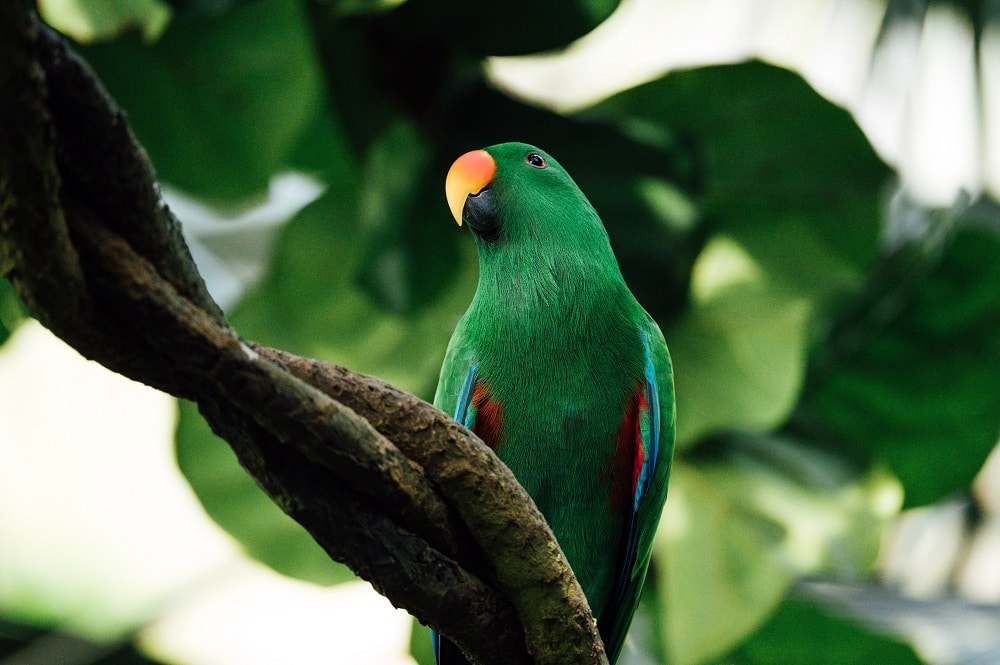 If you have an Eclectus parrot or if you’re intested in adding one to your family, you might be wondering about Eclectus parrot lifespan. How long these colorful birds live depends on a bunch of factors, and it’s important to know what you can do to make sure yours makes it to a ripe old age.

Keep reading for everything you need to know about Eclectus parrot lifespan!

Eclectus parrot lifespan in the wild

The different subspecies of Eclectus parrot are naturally found in Australia and various island groups in the Eastern and South Pacific, like Papua New Guinea, the Solomon Islands, and the Indonesian Maluku and Sumba.

In their wild habitat, which is tropical and forested, Eclectus parrots deal with various dangers. Falcons, owls, monitors and snakes don’t shy away from hunting these parrots (Heinsohn, 2008). Disease, human factors and the elements all pose other difficulties.

Despite the above, potential Eclectus parrot lifespan is known for being pretty impressive in the wild. Although obviously the vast majority of individuals doesn’t make it this far, the species has been recorded as living up to 50 years.

Did you know? Breeding success in wild Eclectus parrots is noted to be pretty darn low. In one study, only 27% of observed egg clutches actually produced a chick that made it to the fledgling stage.

The interesting thing about Eclectus parrot lifespan is that these birds actually tend to live longer in the wild than in captivity. This is not a very common thing. Most domestic animals have longer lifespans because they’re not exposed to as many natural dangers.

The reason that there have been issues keeping Eclectus parrots alive until old age is likely their specific diet. Lack of knowledge about parrot diet causes many of these birds to pass away prematurely in general, but it’s even worse for Eclectus. We’ll go further into it below, but basically, they need much more fiber in their diet than most other parrots.

It is true that there is still a bit of a lack of information on Eclectus parrot lifespan, mainly because these parrots have only been commonly kept as pets since the 1980s (Lindholm, 1999).

The AnAge Database of Animal Ageing and Longevity reports that the oldest officially recorded Eclectus parrot lived at the San Diego zoo and was 28.5 years old. This individual was also noted in a study by Brouwer, Jones, King & Schifter in 2000.

AnAge does note that there have been records of these parrots living up to 40.8 years. This is probably true, although these birds have not been officially documented.

As discussed above, Eclectus parrot lifespan can actually be shorter in captivity than in the wild. Although the situation has probably improved quite a bit since the 1980’s when folks were still getting used to this parrot’s needs, they still often don’t make it quite as long as they should.

So what can you do to make sure your Eclectus parrot makes it to that elusive 40.8 year number mentioned earlier? Or even the 50 years they can supposedly live in the wild? Diet is an extremely important factor, but there are more general care elements to keep in mind.

So, what is all this talk about Eclectus parrot diet? Basically, they possess a longer digestive tract than many other parrots. This means they digest foods more thoroughly, allowing them to effectively break down higher amounts of fiber.

In the wild, Eclectus parrots feed on a range of different foods: fruits, nuts, flowers, flower and leaf buds, seeds and more. In captivity, they can’t be fed a standard parrot diet and they’re a bit more sensitive than many of their cousins. It’s been suggested that this is because with a longer digestive tract, they absorb more nutrients from their food, sometimes too much.

If you’d like to keep your Eclectus parrot healthy and improve its chances of growing old, don’t feed it like you would a granivore such as a budgie or cockatiel. Eclectus gizzards are not used to all those crunchy, dry foods: they basically need wet, fruity bits.

But how do you do this when the fruits we find in the supermarket tend to be cultivated to be sugary but low in nutrients? They’re not at all similar to the wild fruits these birds eat. Eclectus parrot experts tend to lean towards the following:

Really be sure to make the veg and fruit the vast majority, around 80%, of your bird’s diet. Most Eclectus owners try not to feed their birds pellets at all. If you do decide to offer them occasionally, make sure they’re all-natural.

Did you know? Eclectus parrots are sensitive to a phenomenon called toe tapping, which is not really harmful in itself but can be an indication that there’s something wrong with their diet. It has been recommended to avoid any vitamin-fortified foods, processed human foods and spirulina.

Toe-tapping. From The Combined Perspectives of an Eclectus Owner and an Avian Veterinarian

If you’ve got your Eclectus parrot’s diet nailed, you’re halfway there. There are plenty of other things to do to ensure your bird lives a long and happy life, though.

One of the other primary causes of premature death in parrots is stress. Stress can originate from different sources, but a very important one is lack of attention and mental stimulation. Parrots are extremely social beings and will wither away without plenty of interaction.

What should you do to prevent boredom and loneliness in your Eclectus parrot?

Tip: Eclectus parrots can be fine talkers. Talking training is a fun way to spend time with your parrot and actually see (or rather, hear) the results!

Aside from diet and stress prevention, there are a few other care factors you should really be keeping in mind. Eclectus parrot lifespan can really be shortened if you don’t provide the best possible care!

How old is my Eclectus parrot?

In the wild, Eclectus chicks take around 13 weeks to become fledged. They stay with their parents until the six month mark and reach sexual maturity when they’re about three.

It’s possible to see if an Eclectus is a juvenile or not. You can look at males’ beaks, for example: in adult males, the lower beak is dark while the upper beak is a yellowish orange color. In females, the beak doesn’t go fully black until they’re about a year and a half.

If your Eclectus parrot has passed the juvenile stage, there is unfortunately no physical way to tell how old it is. This can be very frustrating if you have an adopted or rescued bird with unclear origins! Try checking for a leg band that might contain the information or ask the previous owner if they can point you in the right direction.

If you have any more questions about Eclectus parrot lifespan or if you want to share your own experiences with these fascinating pet birds, don’t hesitate to leave a comment below!