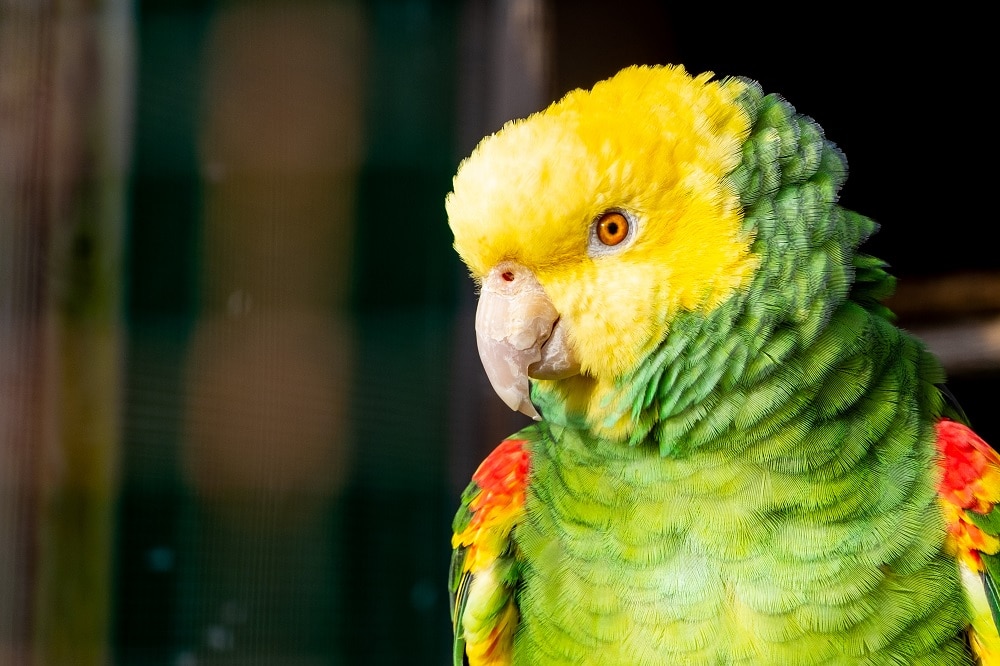 Thinking about adding a double yellow headed Amazon parrot (Amazona oratrix) to your family? These Central American parrots are beautiful, social and amazing talkers, but they’re not for everyone.

Keep reading to find out everything you need to know about caring for a double yellow headed Amazon parrot and whether this species is right for you!

Despite what its name suggests, the double yellow headed Amazon is not from the Amazon region. Instead, it’s naturally found Central and South America, including Mexico, Belize, Guatemala and Honduras.

Here, they prefer wooded areas, particularly those near water, like mangrove forests.

Did you know? The taxonomy of the double yellow headed Amazon parrot is a bit of a mess. For example, despite the fact that it’s not even recognized as its own species by some sources (instead included in Amazona ochrocephala), there are multiple subspecies of Amazona oratrix. Some of them, like Amazona oratrix tresmariae (the Tres Marías Amazon from the Mexican Islas Marías) have been debated to probably form a species of their own.

Unfortunately, wild populations have decreased a lot in many of the double yellow headed Amazon’s natural habitats. As of this writing, it was last assessed by the IUCN in August 2020, and unfortunately listed with a big red ‘Endangered’ mark.

The reason this parrot species hasn’t been doing well in the wild is mostly due to poaching. It’s a popular pet, and even though it’s now illegal to catch or trade wild yellow headed Amazons, the population is still decreasing. The vast majority of poached parrots die before they can even be sold.

In order to prevent wild double yellows from entering the pet trade, each parrot has to have proper documentation.

Did you know? Ironically, despite its endangered status, the double yellow headed Amazon is actually an invasive species in some areas. The German city of Stuttgard, for example, boasts a wild population, as do California and Florida.

To help figure out what to feed a parrot in captivity, it’s always a good idea to look at its diet in the wild. In the case of the double yellow headed Amazon, their wild feeding habits reveal that they’re really not picky.

This parrot tends to forage in treetops. Here, it searches for anything from fruits and seeds to flowers, buds, young leaf shoots and even bark.

Unfortunately for local farmers, some of this species’ favorite foods are corn and fruits. They are known for raiding orchards and are sometimes considered pests.

Did you know? A study investigating the feeding habits of invasive double yellow headed Amazons in Stuttgart found that they fed on no less than 64 different plants. They mostly ate the fruits and seeds. Some of these plants were completely ignored by birds natural to the area, as they were bitter or toxic. The Amazons did not seem to care!

Domestic double yellow headed Amazons are known for their healthy appetites. In fact, you’ll have to make sure not to give in to their begging to prevent the risk of obesity.

Feed a high-quality pelleted food as a staple, though make sure you supplement with plenty of veggies and some fruit. You can also offer some seeds (sprouted is ideal!), cooked grains like pasta or rice, and cooked or soaked legumes like lentils.

As we’ll also discuss below in the section on enrichment, it’s important to not always just toss some pellets in your Amazon’s food bowl and be done with it. These birds are highly intelligent problem solvers who naturally spend much of their day figuring out how to find food.

Present food in a way that encourages foraging! Consider foraging toys, foraging boxes filled with greenery and food, or even just whole veggies and fruit to keep your bird busy for longer.

Tip: Want to know more about what a parrot should eat and the different options out there? Head over to the full article on parrot diet.

Although double yellow headed Amazon parrots make lovely pets, they are not for beginners. They are feisty and have big personalities.

Here are a few things to keep in mind about this species’ temperament:

Listing its negative traits like this makes it seem like the double yellow headed Amazon doesn’t really make a good addition to most homes. This is not the case! As long as you have some experience with parrots and no small children, these birds can make amazing pets.

Sure, they can be cranky, but Amazon parrots are also extremely social. Well-trained birds tend to be loyal and smart. Many of them love to cuddle and hang out with their humans. They like to explore, play, shred and talk.

Tip: Not sure if a double yellow headed Amazon is the right fit for you? Despite the prices they fetch, many of these birds end up having to be rehomed. Try to find someone who owns one before deciding so you can meet their bird! Or ask the pet store whether you can spend some time with the parrot you’re interested in buying.

If you’re interested in owning a double yellow headed Amazon, remember that these are not small birds. They can reach almost 45 cm (17″) in length and weigh up to 550 grams (almost 20 oz.). This means that they need plenty of space to be able to stretch their wings.

Give your bird the biggest cage possible, at least about 1 x 1 meter (3.3 x 3.3 feet). If the bird spends a lot of time in its cage, try to make it at least double that. Make sure you go for a sturdy brand, as Amazon parrots love to climb and sometimes even chew their cage.

The cage should contain multiple food and water bowls. It should also have a variety of natural wood perches of different sizes. And most importantly: lots and lots of toys!

Tip: As mentioned earlier, males especially can become very aggressive for a few weeks during breeding season. Make sure you can clean the cage lining and change the food and water bowls without sticking your hand in there, just to be sure.

As discussed earlier, enrichment is extremely important for your double yellow headed Amazon. These birds can become veritable screaming nightmares if you leave them to their own devices. The stress can also seriously shorten their lifespan.

So what can you do to keep your yellow head entertained?

First off, plenty of social interaction is an absolute must. These birds naturally travel in small groups and roost in huge flocks. Safety in numbers, and all that! They just feel more comfortable having someone around.

Here are some things you can do to make sure you give your double yellow headed Amazon the attention it needs:

Did you know? It takes up to 6 years for a double yellow headed Amazon parrot’s adult coloration to appear. In younger birds, the head doesn’t feature quite as much yellow.

As described in the section on housing, your Amazon parrot needs plenty of parrot toys to keep itself entertained. Shreddable items will be much appreciated, but there are also foot toys for your bird to hold, foraging toys, toys that make sounds and balls to play fetch with.

If you’re worried about the cost of all those toys, most of which will end up in pieces in no time, consider making your own. Untreated balsa wood, coffee filters, rattan balls bought in bulk and other items all work fantastically. Because these parrots usually love to bathe, even a dish of water can provide a fun distraction.

You can rotate toys on a (bi-)weekly basis to keep your double yellow headed Amazon interested. And don’t forget the foraging options described in the section on diet!

Did you know? Your Amazon parrot also needs plenty of out of cage time, preferably several hours a day. You can provide it with a play area or parrot tree on top of its cage to keep it entertained and off your precious furniture. Space to fly around is important for both enrichment and to prevent obesity!

Before you consider any type of parrot to your family, it’s important to learn more about their noise levels. All parrots make noise, and the double yellow headed Amazon definitely is no exception!

These are not quiet beings by any means. The species might not be ideal for apartment living, as they do tend to scream in the mornings and evenings and can reach a pretty impressive decibel level.

You betcha! The only species that can beat Amazons like the yellow head at talking are probably African greys. And even then, Amazons tend to do better at singing.

Although you should never get a parrot just because you want it to learn to talk, it is a pretty fun bonus. Talking training is not too challenging: repetition is all you need, and Amazons pick it up pretty quickly.

The only issue is when they start repeating noises you don’t want to hear all day long. Your Amazon wouldn’t be the first to find great pleasure in imitating a barking dog or crying baby.

Like other parrot species, the double yellow headed Amazon is inquisitive and accident-prone. Keep in mind the following:

Did you know? Although double yellow headed Amazons tend to be healthy birds, they can be sensitive to vitamin A deficiency. This especially applies to birds that have been fed a seed-based diet instead of healthy foods.

If you have any more questions about double yellow headed Amazon parrot care of if you want to share your own experiences with this amazing South American species, don’t hesitate to leave a comment below! ?