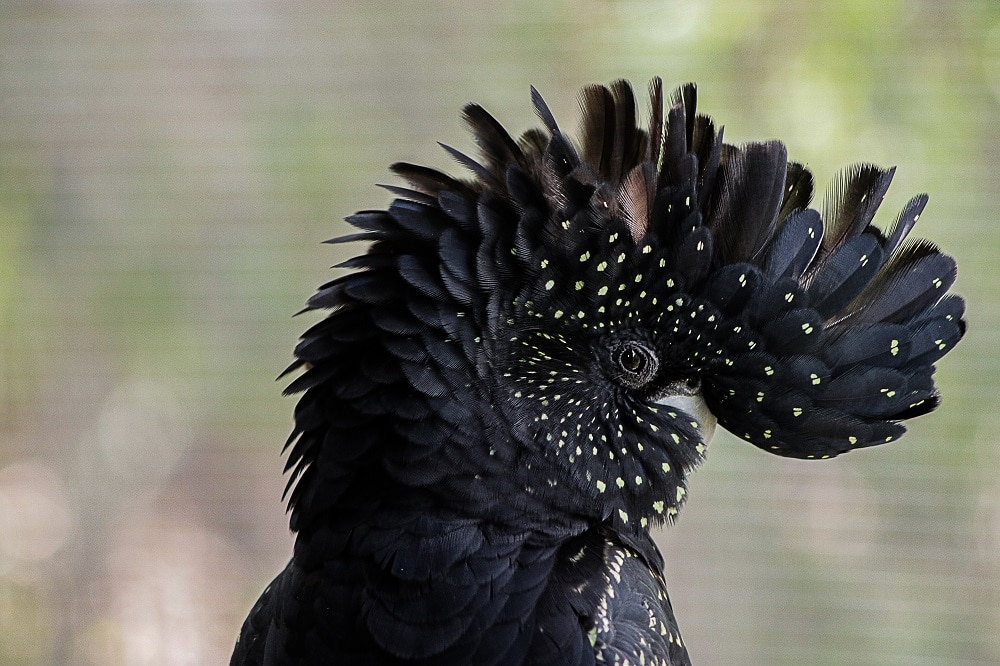 If you’re thinking of adding one of these crested parrots to your family, you might be wondering about the lifespan of a cockatoo. Well, good news! Cockatoos, like other parrot species, can be very long-lived. They are companions for years to come, so make sure you’re absolutely ready before adopting one.

Keep reading for everything you need to know about cockatoo lifespan and how to make sure your ‘too lives a long and happy life in your care.

Also known as salmon-crested cockatoos (Cacatua moluccensis), Moluccan cockatoos are similar in looks to the umbrella cockatoo but with a pinkish tinge rather than stark white feathers. Their lifespans are likely pretty similar as well.

Moluccan cockatoos are generally reported to live for about 70 years in captivity, but as with other parrots, there have been claims of older much individuals. Some of these claims are pretty well-founded.

A paper by Young, Hobson, Lackey and Wright called “Survival on the Ark” published in 2012 talks about a Moluccan cockatoo that lived for 92 years. This was the oldest parrot included in their research, out of 87.777 parrots.

Did you know? Lifespan of parrots in the wild is often pretty poorly documented. Of course, the average cockatoo will live significantly shorter in the wild simply due to environmental factors like predators and illness.

The Goffin’s cockatoo (Cacatua goffiniana, also called Tanimbar corella) is one of the smaller cockatoo species out there. It also listed as one of the less long-lived species, although it’s important to note that there is little data on their average lifespan. Some sites list as little as 26 while others say 65!

It’s probably fair to assume that with good care and a dose of luck, it’s not unrealistic to assume that your Goffin’s could be around for at least 25 years. In the “Survival on the Ark” study mentioned above, the oldest Goffin’s cockatoo out of 581 birds included in the study was 30.

According to Wikipedia, wild sulphurs are expected to live between 20 to 40 years. In captivity, that number appears to go up quite a bit. The oldest sulphur-crested ‘too out of 977 birds noted in the “Surviving on the Ark” study was almost 73 years old. And then there was Cocky the cockatoo, who was claimed to have lived to 120 years old before dying in 1916, although the veracity of this story is obviously somewhat doubtful.

Also known as white cockatoos and scientifically as Cacatua alba, umbrella cockatoos are one of those ‘too species with an amazing lifespan. According to reports from zoos that have the documentation to prove their umbrella cockatoos’ ages, they can definitely live for up to 60 years at least. In captivity, that is; in the wild it’s likely about a decade shorter.

There are plenty of reports of umbrella cockatoos actually surpassing 60 years of age. Some even claim theirs has made it to 100 years! Although many of these reports are a bit iffy due to lack of proof, some of them seem quite plausible. Take Duster the cockatoo for example, who was claimed to have turned 89 in 2014.

Also known as pink-and-grey cockatoos or rose-breasted cockatoos, galahs (Eleophus roseicapilla) are known for their lovely pink coloration. They are very common in Australia and also popular pets.

Galah cockatoos have a pretty impressive lifespan that appears to be at the upper range when it comes to parrot lifespans. In the wild it appears they live to around 20, but least 40 years is not unheard of at all for this species in captivity.

With good care and a big dose of luck, your galah might even make it to up to 80 years old! The oldest galah out of 1889 birds in the “Surviving on the Ark” study was almost 73.

The smaller cockatiel is said to be the second most popular pet parrot species out there, with only budgies being more common. And yes, despite their size, these are actually still 100% real cockatoos! They make up their whole own species within the cockatoo family; if you’d like to read more about that, head over to the article on cockatoos vs cockatiels.

When it comes to lifespan, cockatiels definitely don’t do too much worse just because they’re smaller. As mentioned in the article on cockatiel lifespan, these guys live for around 10-15 years in the wild. In captivity, 15 years should be attainable. Even 20 to 25 years is not unheard of for cockatiels.

What influences the lifespan of a cockatoo?

It has to be mentioned that the lifespans we’ve discussed so far in this article have mostly been maximum lifespans. The average and median lifespans for cockatoos are unfortunately not quite as high. For example, the median lifespan out of 1675 salmon-crested cockatoos included in the “Survival on the Ark” study was only about 4.5 years.

What the above means is that although amazing ages can be reached by these birds, it’s not the norm. Still, you can count on the average cockatoo to live for at least 20 years and possibly a lot longer with some luck, good genetics and especially proper care.

So what does “proper care” entail? Let’s go into what YOU can do to help make sure your cockatoo makes it to a respectable age, since what you provide has such a massive impact on your bird’s potential lifespan.

The absolute easiest thing you can do to make your cockatoo’s potential lifespan shoot up is to provide a proper diet. It’s still a common myth that pet parrots can subsist on a diet of seeds and nuts, while in fact they need a lot more variation.

A seed-only diet can quickly lead to obesity and the same goes for overfeeding. As with humans, this is a huge silent killer of birds in captivity. Try a mix of the following to make sure your ‘too gets all the (micro)nutrients it needs:

Tip: Use foods to stimulate your cockatoo’s mind, thereby reducing stress as well! Foraging toys, lots of variety and make the bird work for its treats.

When it comes to general care, there is a host of things you can do to keep your cockatoo healthy and also improve its quality of life. It’s impossible to list everything here, but try to always keep the following in mind:

Tip: If you’re not prepared or not able to spend multiple hours a day with your bird, a cockatoo is probably not for you. They’re highly social and not very independent. Without lots of attention they just wither away.

How old is my cockatoo?

If you adopted your cockatoo from someone else, they might not always have the proper records. Unfortunately many people don’t realize how long they live and what owning a cockatoo entails, causing the birds to pass through many hands over the years.

So is it possible to figure out how old your cockatoo is? Not really, unfortunately. You can tell the difference between an adolescent bird and an adult one, but that’s about it. If your ‘too doesn’t have a leg band and former owners can’t dig up any records, the bird might be five years old or it might be twenty-five. A few vague indicators of age are:

If you still have more questions about the lifespan of a cockatoo or want to share your own experiences with these amazing crested parrots, don’t hesitate to leave a comment below!

11 thoughts on “What Is The Lifespan Of A Cockatoo?”